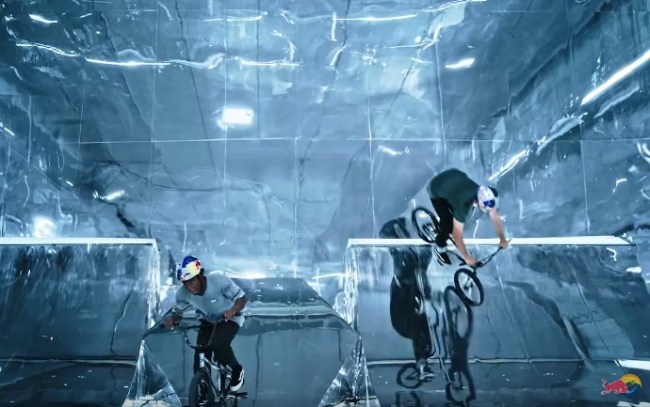 BMX is an extreme sport that doesn’t get nearly as much love from the mainstream sports media as it should (or as it used to). All things considered, it’s a pretty badass sport. These bros are able to do things with a bike that you or I couldn’t attempt in our wildest dreams.

This ‘MIRROR PARK’ was recently featured on the Red Bull YouTube channel. This badass BMX park is located near Pamplona, Spain and it’s unlike any other BMX park in the world. It’s part hall of mirrors, part BMX park, and it looks like something from another world when you’ve got pro riders being filmed.

Here, professional BMX riders Courage Adams and Paul Tholen are charging the Mirror Park with cameras attached to their bikes. And I’m not kidding when I say that I’d happily pay a couple bucks for a feature-length version of this:

I’ll say it again, BMX doesn’t get nearly as much love as it deserves. I’m not trying to go out this afternoon and buy a BMX bike for myself and crack my hip open at the park but it’s certainly got me wondering why this sport has lost all of its commercial appeal. The only time you ever see it is for like 15 minutes a Summer on ESPN’s Summer X Games.