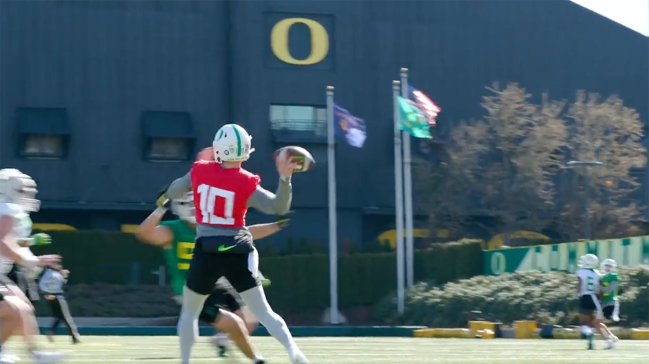 The addition of the transfer portal in 2018 made college football even more chaotic than it already was. Among the complete and utter mayhem that has come with players transferring all over the country, the quarterback position is, as always, the biggest storyline.

And of the multiple quarterbacks who transferred after the 2021 season, Bo Nix was perhaps the most shocking. The three-year Auburn starter made the decision to join the Oregon Ducks and play in the Pac-12.

Now that he is in Eugene, Bo Nix is the clear-cut frontrunner to win the starting job at Oregon.

The true senior will compete with five-star freshman Ty Thompson, but is expected to beat him out for this year.

During his time with the Tigers, Nix averaged more than 2,300 passing yards per season and also ran for more than 300 yards in two of the three seasons. After having a career-low year in 2021, he will try to turn it around in his last year before testing the NFL waters.

Oregon has already begun spring practice, but the Ducks are currently on spring break.

After getting the first two practices of the year in last week, they will return to action on the 29th.

While most students might head to the beach or the mountains for spring break, Nix went back down South to put in some more work before continuing his first season in Eugene. In a recent video from his time with QB Country, one of the top trainers in the Southeast, Nix is absolutely spinning it.

A highlight video from workouts is not always the best way to judge how a player looks, obviously. However, Nix looks really good.

His release is quicker, his motion is more structured, and there is some serious zip on his throws. Take a look:

Oregon QB @BoNix10 back down South. Big year ahead! pic.twitter.com/rXKjHFbg2s

Assuming that Nix wins the starting job over the course of the next few weeks, his first season with Oregon will not be easy. The Ducks open the year against Georgia and have to play Eastern Washington, an explosive FCS program, and BYU before even beginning Pac-12 play.