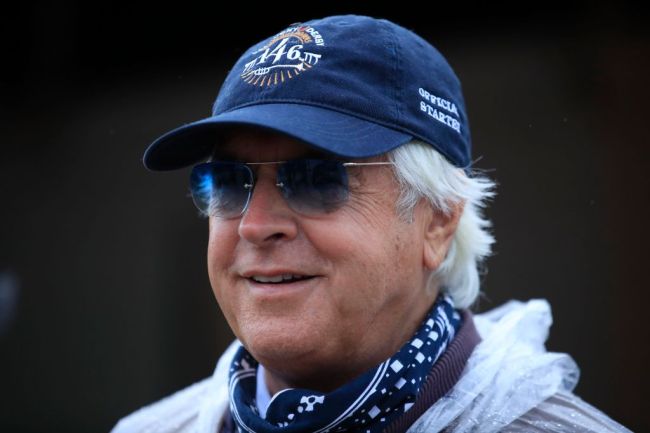 Bob Baffert is no stranger to coming up with explanations of why his horses test positive for banned substances, but his latest following Medina Spirit’s failed drug test and his own suspension from Churchill Downs is quite a doozy.

According to Rick Bozich, Baffert said one of the testing issues was created by a groom, a person that handles day-to-day work inside stalls. Apparently, the groom inside Medina Spirit’s stall urinated in the stall after taking cough medicine, and the horse ate some of the contaminated hay which then led to the positive test.

Baffert says one test issue was created by a groom urinating in the stall after the groom had been taking cough medicine. Horse ate some of the hay.

Bozich’s report of the pee-covered hay came shortly after Baffert made an appearance on Fox News claiming that the suspension handed down by Churchill Downs was a result of “cancel culture.”

Case solved: pee-covered hay and cancel culture is why Medina Spirit and Baffert are in hot water here.

“We did not give it to him,” the seven-time Derby winner said after the news broke of the failed drug test. “The vet, no one, has ever treated him with it. This is a gut punch for something I didn’t do. It’s disturbing. … I don’t know what’s going on in racing right now, but there’s something not right. I don’t feel embarrassed. I feel like I was wronged. We’re going to do our own investigation.”

This isn’t the first time Baffert has blamed a failed drug test for one of his horses on ingesting something courtesy of a groom.

In 2020 two of his horses, Charlatan and Gamine, tested positive for a banned substance. Baffert alleged that grooms used a lidocaine cream on their hands before handling the two horses and the horses somehow ingested it.

While the whole cancel culture and pee-covered hay excuses are absolutely absurd, you have to tip your cap to Baffert for his creativity here. In a sport that is far from clean, Baffert is simply going full-denial and coming up with any excuse imaginable to get himself out of the situation.