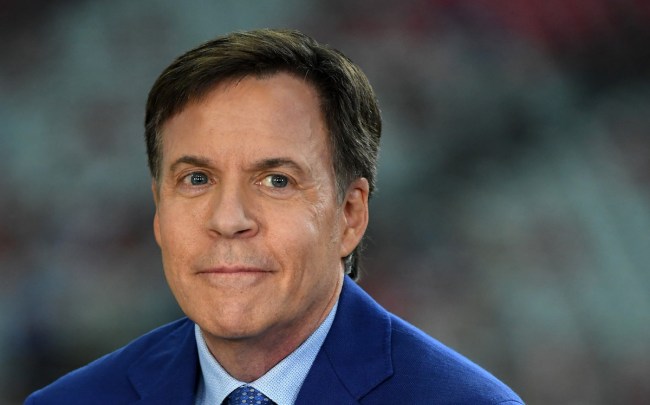 The sports broadcasting game has produced some absolute legends over the years—the kind of people who have the ability to enhance your viewing experience and give you a deeper appreciation for what’s unfolding onscreen (and off of it).

Virtually every fan has at least one person who’s helped them navigate the world of sports over the years, whether we’re talking about Jim Nantz and his incomparably soothing voice, the unparalleled insanity of Bill Walton, or—most recently—the prophetic abilities of Tony Romo.

However, I don’t know if there’s anyone who’s managed to help me appreciate athletics more than Bob Costas, who has covered virtually everything under the sun over the course of his illustrious career at NBC (which will unfortunately be coming to an end at some point in the near future).

However, there was one event Costas was suspiciously absent from: last year’s Super Bowl between the Patriots and the Eagles, which was supposed to mark his final championship game with NBC.

A few weeks before the game, the network announced Costas would not be covering Super Bowl LII for undisclosed reasons. This week, the commentator spoke with Outside The Lines to discuss the snub and revealed the laughable reason he was barred: acknowledging the fact that concussions are bad.

For the first time, Bob Costas tells @OTLonESPN the story of how he went from broadcasting icon to being dropped from covering his final Super Bowl. https://t.co/Zb9RkWG0pM pic.twitter.com/JxgyC6Asdo

Before the game, Costas had spoken at a consortium, where he addressed the potential dangers that come with playing football and stated, “This game destroys peoples’ brains.”

He claims it was only a matter of time until the network announced they’d be sanctioning him for his comments, saying:

“I think the words were, ‘You’ve crossed the line. My thought was, ‘What line have I crossed?’”

I have no idea how the executives responsible for making this decision were unable to avoid suffocating to death by having their heads buried so deep in the sand.