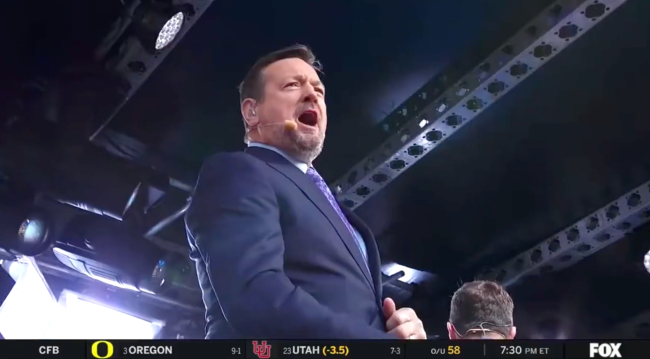 Former 18-year Oklahoma football head coach Bob Stoops has a deep-rooted hatred for Texas. The Sooners and the Longhorns are two of the biggest rivals in college football and the distate for one another is real.

Stoops, who is currently serving as an analyst on Fox’ Big Noon Saturday, is not keeping his allegiance a secret. On Saturday, the cast of Stoops, Brady Quinn, Matt Leinart, Reggie Bush and Rob Stone traveled to Norman for OU’s game against Iowa State.

The crowd was packed with fans and Stoops, who led the Sooners to 10 Big-12 titles and a national championship, was right at home. Early in the show, the 62-year-old decided to get the crowd fired up.

Stone asked Stoops if he would lead them in a “Boomer Sooner” chant. Without hesitation, Stoops sprung from his seat.

Not only did he lead the standard call-and-response, but he took it one step further. He decided to take shots at Texas on live TV.

After getting the crowd going with two Boomer/Sooner chants Stoops prompted the crowd with a “TEXAS STILL…” The crowd replied “SUCKS!”

By the book, journalists and analysts are supposed to keep their allegiances private. However, that’s an antiquated way of thinking.

It is no secret that Bush and Leinart are Trojans. The same goes for Quinn and Notre Dame. Certainly, after 18 years as the head coach, Stoops is very clearly aligned with Oklahoma.

Thus, letting him take shots at Texas in front of a home crowd, is tremendous television. TEXAS STILL SUCKS!