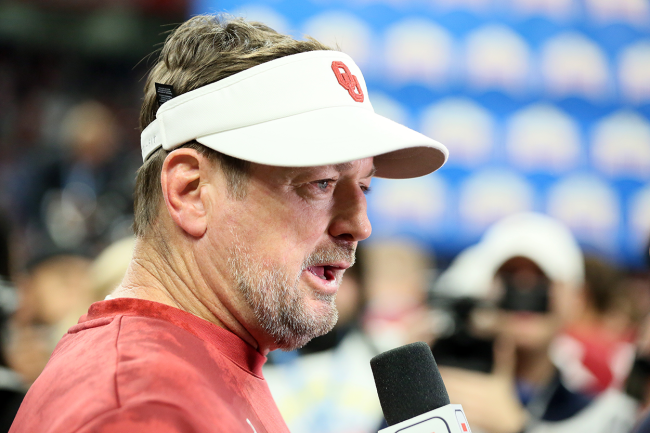 Although Lincoln Riley had a lot of success at Oklahoma, his predecessor (and interim successor) wants the Sooner State to know that everything is going to be just fine now that he is in Los Angeles. Bob Stoops spoke on the floor of the Oklahoma House of Representatives on Tuesday morning and had something to say about the new USC head coach.

Stoops, who spent 17 years as the head coach of the Sooners, won 10 Big-12 titles and one national championship during his tenure. Ever since leaving Norman, the 61-year-old has been closely involved with the program.

At every opportunity he gets, Stoops is around practice and in the facility. After Riley left for Los Angeles at the end of the regular season, Stoops took over as interim head coach and led Oklahoma to a bowl win over Oregon.

Bob Stoops is a program guy and he’s not concerned with the future of the Sooners without Riley.

He visited the state Capitol building in Oklahoma City to accept a concurrent resolution from lawmakers that honors his service to the state of Oklahoma as the Sooners’ head coach. During his time on the House floor, Stoops said that he was thankful, but would rather have been playing Texas in the Cotton Bowl.

Stoops is on the Senate Floor now, says he’s a fish out of water in the capitol and “rather be in the middle of the cotton bowl fighting Texas.” pic.twitter.com/k5TOntydhm

In addition, he dropped an incredible one-liner that couldn’t be a better representation of what college football means to a state like Oklahoma. While addressing the House floor, Stoops said that “Lincoln Riley didn’t invent Oklahoma football,” meaning that the Sooners will be just fine without him.

In case you needed to hear it from Bob Stoops himself, Lincoln Riley didn’t invent @OU_Football #BoomerSooner pic.twitter.com/pYUUnbDk1D

While people outside of the Panhandle State might say otherwise, Stoops is right. Four coaches in Oklahoma football history have won 100+ games and the Sooners are the only program in the country that can claim that number.

And not one of them was named Lincoln Riley…

Stoops’ resume is stacked. He reached the 100-win mark faster than any other coach in college football history, he is Oklahoma’s all-time winningest coach and went to 18-straight bowl games— becoming the only coach in the BCS era to win an Orange Bowl, Rose Bowl, Sugar Bowl, Fiesta Bowl and national championship.