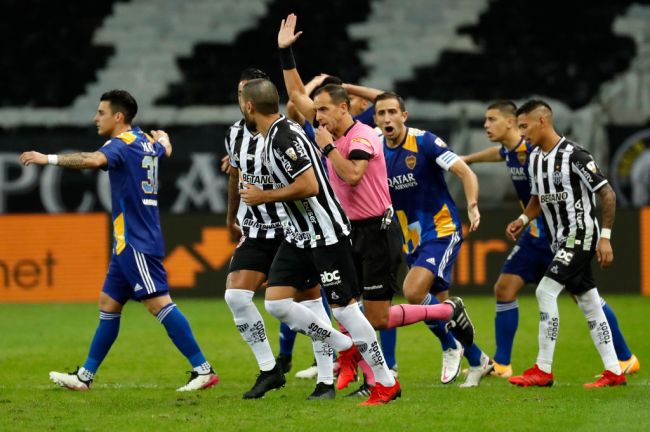 The entire Boca Juniors soccer team spent the night in a Brazilian police station after a post-match riot on Tuesday. It was a chaotic scene that began with elimination from the Copa Libertadores tournament.

Things began when Boca, one of the top Argentinian clubs, had a goal overturned by VAR in the first leg of its Round of 16 matchup with Atletico Mineiro.

The first leg ended in a draw. During the second leg, a similar scene unfolded and Boca had a goal come off of the board after VAR. The players were visibly frustrated.

There was a commotion in the Atletico Mineiro vs Boca Juniors match because the goal was annulled by VAR. pic.twitter.com/xmamjfRgpX

Neither team was able to find the net, both matches ended in a draw, and the second leg went to penalties. Had either or both Boca goals stood, the club would have advanced.

Instead, Atletico advanced on PKs.

🔥⚽🇧🇷 Relive all the drama from the penalty shootout between @Atletico and @BocaJrsOficial! pic.twitter.com/C2r6h2CfVY

After being eliminated from the highest level of competition in South American club football, the Boca team was furious.

Players attempted to storm the Atletico dressing room and a riot ensued. Players spat and attacked police officers, threw objects at officials and shouted obscenities amid the violent protest.

Things were so bad that the Brazilian police had to respond with tear gas.

Players and coaches tried to accost one of the referees and escalated the altercation. Officials and government police had to force the Boca members out of his dressing room.

Scenes after Boca Juniors’ #CopaLibertadores elimination at the hands of Atletico Mineiro.

The entire thing was a wild scene and the Boca team tried everything it could to get their hands on the referees and opponents.

Boca Juniors players attacking the Atletico Mineiro team and staff and having to be tear-gassed after their Copa Libertadores defeat on penalties.pic.twitter.com/wWlARXw4dm

At one point, former Manchester United striker Rojo appeared to punch an officer before picking up a fire extinguisher and threatening more violence.

However, instead of the two team members going to the police station alone, the entire Boca team decided to spent the night with them.

“If the two stay, we stay two. Let’s go all or none”, said Boca coach Miguel Ángel Russo.

The opposition, and winning side, Atletico Mineiro gave their version of the events after the insane riot and brawl.

“Security guards from Galo and Mineirão tried, unsuccessfully, to contain them. The Argentines then decided to invade Galo’s locker room, where there were players, commission and board. Even President Sérgio Coelho tried to prevent the invasion to protect Atlético professionals.

“On the way, they attacked everyone they came across, in addition to breaking drinking fountains and protective railings.

“The MP [military police] arrived after some time and drove off the attackers with pepper spray.

“The balance was of injured people, fortunately without any seriousness. There was even an attempt to attack Atlético’s football director, Rodrigo Caetano, with an iron bar.

“The MP gave arrest to some players and members of Boca’s technical committee.

“After a long negotiation, brokered by [Atletico Mineiro] President Sérgio Coelho, the Argentine delegation went to the police station to register an incident report for depredation of property and aggression. Nobody will be detained.”

At this time, the number of Boca players who will be indicted has not been confirmed by police.

However, an officer told Boca officials that “security forces have to take legal action.”

Legal consul of Argentina in the Belo Horizonte, where the match was held, tried to resolve the legal issues. But even he could not prevent the Boca players from being booked.

The Boca Juniors team is expected to return home on Wednesday— apparently after spending a night in jail together.