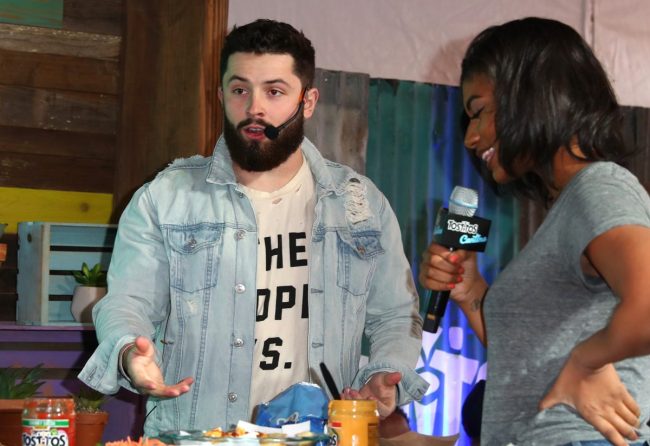 The Panthers’ new starting quarterback might just have a new sponsorship deal lined up in Charlotte. Noth Carolina based fast food chain Bojangles is apparently courting Baker Mayfield to be the new face of the franchise with his move to Carolina.

The former Browns’ signal caller was recently traded from Cleveland to the NFC South, where he’ll hope to lead his new team to a division crown against the likes of Tom Brady, Marcus Mariota, and Jameis Winston.

In that move, it was announced that Mayfield had lost one of his longtime sponsors with the Browns, Progressive Insurance. The passer acted in a series of commercials for the company under the “At Home With Baker Mayfield” theme. While the quarterback had hoped to continue the partnership upon his move to Carolina, a deal was unable to get done.

Now, though, he might have a replacement gig which comes in the form of a very prominent Southeastern staple.

Fast-food chain Bojangles reached out to Baker Mayfield on Twitter to seemingly garner his interest in a possible deal. And it seems that the famous biscuit company is ready to run with the “Baker” idea.

There’s some mutual interest, too. When asked about his recent move to Charlotte, he mentioned the fast-food chain as a place he’s eager to visit.

“I’m looking forward to having my first meal at Bojangles.”

The recruiting pitch of a potential partnership had folks talking on social media.

There were some hilarious replies to the possibility of a Mayfield-Bojangles deal.

While the restaurant is famous for their biscuits, fans are wondering if they bake “turnovers,” too…

Some even think he could use this as a fallback plan if things don’t work out with the Panthers.

He will be working at Bojangles this time next year https://t.co/2tUJavGh3m

But most see the entertainment value of more Baker Mayfield commercials. WE NEED MORE!

These Baker x Bonjangle commercials are going to be horribly entertaining https://t.co/FdgXrhR0pr

It's a slam dunk https://t.co/cTLaDri4A3

Hopefully, this will become a reality in the upcoming NFL season.