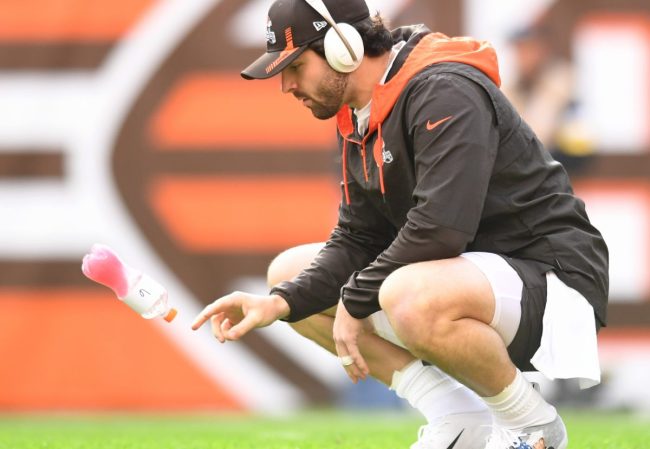 There has been some big news surrounding Baker Mayfield this NFL offseason. It’s not his trade, his falling out with the Brown, or his potential revenge game in the season opener. This is important.

Mayfield confirmed on Tuesday that he will no longer be acting in Progressive ads.

The quarterback became a Sunday afternoon staple with his “At Home with Baker Mayfield” commercials which aired throughout NFL broadcasts. The series of plugs saw the Mayfield living in the Cleveland Browns’ FirstEnergy Stadium while doing household chores for his home team.

Ads saw Mayfield mowing the lawn, doing the dishes, and salting the ice from the stadium stairs. They were pretty funny, too.

And while the passer and insurance company toyed with the idea of a Cleveland to Carolina move, it appears that those efforts did not lead to a continuation in the series.

The news comes as a blow to NFL followers, and they’re reacting on social media to the announcement.

Fans and media offered up their best responses to the news that Baker Mayfield will no longer act in the Progressive commercial series. Take a look.

Some were just upset with the fact that they’ll no longer see the hilarious ads on Sundays.

We won the battle…but at what cost?

Others commented on the idea of Baker Mayfield handing Deshaun Watson the keys to the Dawg Pound.

Ahh I would've loved that. He hands the keys to FES to Deshaun and is like "take good care of the place"

Can’t wait for the Baker commercial where he packs up his bags and moves out of the Browns stadium. Then Deshaun Watson walks up and says “Hello, I just moved in down the street and I’m legally required to inform you…”

It’s truly the end of an era.

Maybe we’ll see Mayfield take over Luke Kuechly’s CPI Security commercials or slide in with another of the Panthers’ team sponsors. Hopefully, they’ll be as funny as these were.