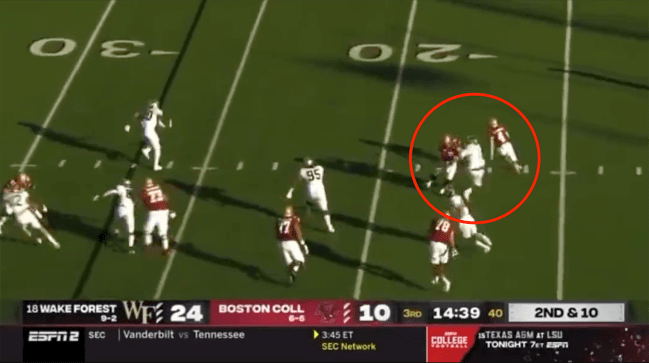 Boston College’s Zay Flowers scored one of the craziest touchdowns in recent memory. There was only one problem— it didn’t count.

During Saturday’s game against Wake Forest, the Eagles’ wide receiver took a reverse around the right side. However, there was no space to advance down field.

Thinking quickly, with five defenders around him, Flowers threw a nasty move to reverse field. As he went streaking back across the field, his quarterback set a MASSIVE block to clear some room.

Flowers proceeded to take the reversed-field reverse back around the left side and went untouched for six. But there was a penalty flag on the field.

It looked like a fairly clean block, as Fox clearly would have had Jurkovec in his peripheral vision, but the officials disagreed.

Take a look at the huge block:

Touchdown of the year for Boston College scored by Zay Flowers gets called back because of an illegal blindside block on the QB Jurkovec 😭#BostonCollege #BC #WakeForest #CollegeFootball pic.twitter.com/GZEr4pziIt

Because the play was called back, the touchdown came off of the board, which is such a bummer. Jurkovec, who missed a solid chunk of the early/mid-season with an injury, is a dynamic playmaker who always gives the Eagles a chance.

In this instance, he did exactly what he is supposed to do, but was in the wrong place at the wrong time — at least, according to the referees.

BC went on to lose 41-10. If that touchdown had stood early in the second half, the momentum may have swung and things might have gone differently.