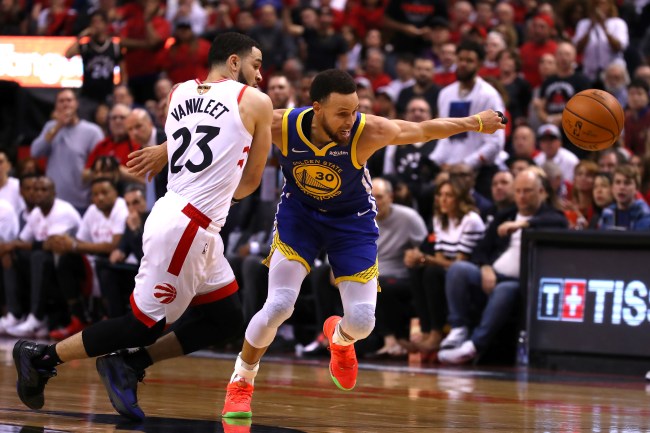 In the absence of Klay Thompson and Kevin Durant, the Raptors were prepared to let literally anyone on the Warriors roster beat them in Game 2 but number 30. Late in the fourth quarter, Nick Nurse channeled his inner high school coach and switched to a box-and-one defense on Steph Curry, a plan that was effective as the former MVP did not score the entire last frame and the Warriors were held to just 21 points in the fourth.

After the game, Curry said the Raptors “were playing some janky defense,” and his littler brother agreed.

They playing a Box and 1? Lol

I have never seen that in the NBA before..

If you’re wondering why the best shooter alive didn’t attempt a shot in the final eight minutes of the game, take a look at the aerial view of how many bodies the Raptors were throwing at Curry in waning moments of the game.

Look at how Steph is being guarded lol. pic.twitter.com/7uCZVkve4F

On Tuesday, Curry walked back his word ‘janky’ and gave the Raptors off-handed respect for their defense prohibiting the Warriors from finding a rhythm late.

“… it was obviously innovative and unexpected in terms of defense you haven’t seen in awhile,” Curry said. “But there are things that we could have done differently to try to create better shots on every possession they threw at us, whether it’s me off the ball or with the ball in my hands or working around other guys.  But at the end of the day, that fourth quarter was just kind of weird overall with the pace and lack of scoring.”

“In ninth grade a team played one against me. Very proud to announce that,” Kerr quipped. “I had a box-and-one, just like Steph. So janky defenses have been going on for a long time.”

With Kevin Durant out for Game 3 tonight and Klay “questionable,” we could see some janky defense for four quarters. Prepare for Andrew Bogut to score 40.