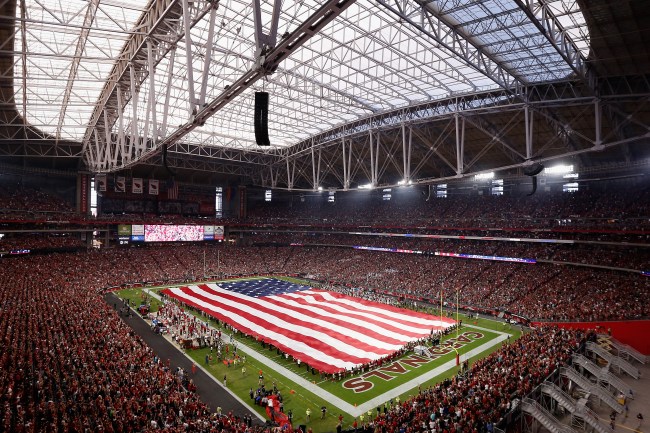 It appears that there is a certain contingent of fans who are currently unhappy with the NFL right now over the National Anthem.

On Thursday, ESPN’s Jason Reid revealed that the league is planning to play Lift Ev’ry Voice And Sing also known as the “black national anthem” before the “Star-Spangled Banner” during the first week of games this season.

"Lift Ev'ry Voice And Sing," commonly known as the Black national anthem, is expected to be performed live or played before every Week 1 NFL game, sources told @TheUndefeated. https://t.co/fOXcaiXOr2

“Lift Ev’ry Voice And Sing,” traditionally known as the Black national anthem, is expected to be performed live or played before every Week 1 NFL game, and the league is considering a variety of other measures during the upcoming season to recognize victims of police brutality, a source familiar with the league’s discussions told The Undefeated on Thursday.

The song would be performed before “The Star-Spangled Banner,” the source said. The NFL’s season opener is scheduled for Sept. 10, with the Kansas City Chiefs hosting the Houston Texans.

The league hopes its efforts demonstrate “a genuine commitment to the public, players and coaches and that player voices continue to be heard,” the source wrote in a text message. “This is key to educating fans, and becoming a prominent voice in the fight to end racism.”

Obviously the idea of having two national anthems annoyed many and the hashtag #BoycottNFL began trending on Twitter.

The NFL needs fans more than we need the NFL.

If they kneel during the anthem, or play anything other than the actual National Anthem, we should not tune in.

It’s time to teach these overpaid athletes that they can’t bully the American people! #BoycottNFL

#BoycottNFL Now more than ever. We are the UNITED States, not DIVIDED Races. We have ONE national anthem and it's the Star Spangled Banner. https://t.co/TxZkrlCjP2

#BoycottNFL the players need the fans, not the other way around!

How many national anthems do we have??

Is there an Hispanic national anthem?

This is asinine. We are ONE America. E Pluribus Unum. https://t.co/nv0djWREnH

Smh. Way to further divide America .. if that was your intent, good job @NFL .. I've said goodbye to @espn and have been just fine without it.. time to walk away from the @NFL too. #ByeNFL #BoycottNFL https://t.co/FzlpTTHXBj