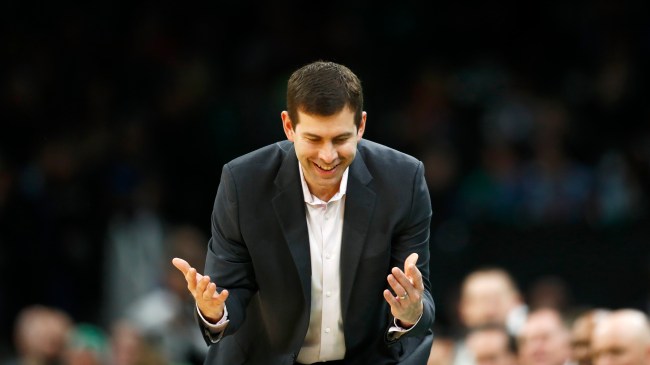 It’s hard to imagine anyone who would want to be Brad Stevens right now. Unless of course they want to steal his likeness to buy a mini waffle maker and a 6-cube organizer shelf that will snap in 8 months at a national retail chain.

“I told my wife ‘I had a root canal and my identity stolen last week and those were two of my better days in the last eight days.'”

“It was the real stuff. People were trying to open cards and all this stuff. Calling Target to open account. Like I would have an interesting in opening a Target account right now during this stretch.”

Unless Target has an aisle for rim protection and resolve, I cannot conceive a reason why Brad would want to open a Target account.

Maybe to pick up some baby powder for the 8 spankings the Celtics have taken in their last 11 games, or some diapers for pissing away leads like they’ve made a mob-backed deal with Tim Donaghy, or possibly some new threads to help his squad exude more confidence than the kid with the cold sore at a junior high dance.

The only magic mushroom in the Celtic’s heaping mountain of cow dung is that they literally do not have an identity to steal. Even they don’t even know if they want to be contenders or tank for Bronny James.

.@KendrickPerkins says Brad Stevens is on the hot seat in Boston.

"Brad Stevens is just getting walked over!" pic.twitter.com/5ITQz3F02c

Fire Brad Stevens and get someone who isn’t lobotomized

Poor David Blatt was fired mid-season while his Cavs lead the Eastern Conference (and went to the Finals the season before). The NBA is fickle with coaching and when Boston fans light their own fuse, there is no turning back.

Hopefully the guy pretending to be Brad Stevens can go to Target and buy him a bucket before Danny Ainge hands him a pink slip.