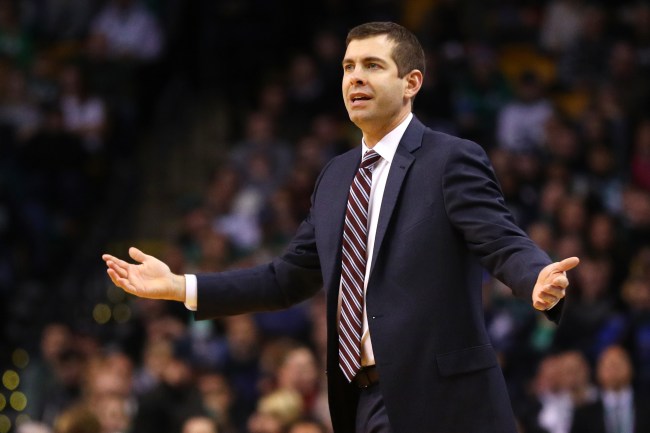 Out of 29 votes for NBA Coach of the Year, Celtics head coach Brad Stevens received zero votes from his coaching peers. Stevens, who led the Celtics to a 55-27 record and the second best record in the East (without its big free agent acquisition in Gordon Hayward), lost to Raptors head coach Dwane Casey.

If you’re memory was wiped clean of the past two weeks, you could make a case for Casey, who led the Raptors to the best regular season in franchise history. What would be tough to make a case for is how seven other coaches received votes ahead of Stevens, the man who is one win away from heading to the Eastern Conference Finals without Kyrie Irving or Gordon Hayward.

Those seven coaches were:

To add insult to injury, the NBCA Coach of the Year is chosen by fellow coaches, as opposed to the actual Coach of the Year, which is voted on by media members. So as a refresher: of the 29 other coaches in the NBA, none of them thought Brad Stevens deserved to be named their Coach of the Year.

Isaiah Thomas, who played under Stevens from 2014-2017, was dumbfounded.

No way in hell Brad Stevens doesn’t win Coach of the year. No disrespect to the other head coaches but He’s by far the best coach in the NBA

Others felt strongly too.

WAIT?!?!?! BRAD STEVENS DIDN'T GET A SINGLE VOTE FROM HIS PEERS FOR COACH OF THE YEAR! HE SHOULD'VE RECEIVED EVERY VOTE.

DOC RIVERS GOT A VOTE FROM A FELLOW COACH?!?!

WHAT THE HELL IS GOING ON HERE?

When you hear Brad Stevens didn't get a single vote for coach of the year… pic.twitter.com/n8HU2j5yI0

Brad Stevens is missing his two best players and STILL has his team two wins from the conference finals.

Forget Coach of the Year. The man deserves MVP votes.

So the 30 NBA coaches voted Dwane Casey the Coach of the Year and Brad Stevens got ZERO votes? pic.twitter.com/lBv1kFAUID

I'm aware that its not the media NBA Coach of the Year award. This is the one from their PEERS

Man these guys must HATE that they aren't Brad Stevens. You just hate to see the jealousy ooze

Brad Stevens didn't get even one vote for coach of the year. Excellent reminder that these awards don't matter, nothing matters, were all gonna die one day, etc