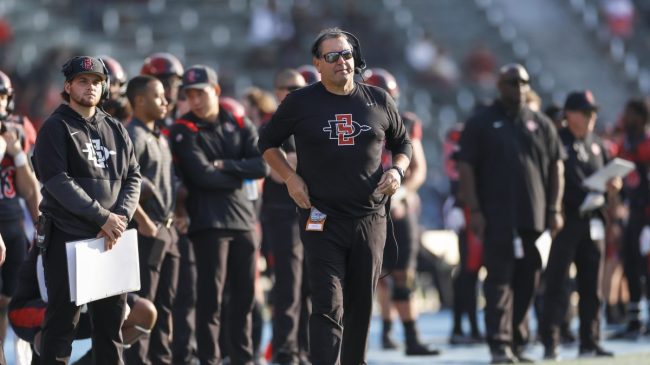 Former San Diego State punter Matt Araiza was at the center of the NFL world last week for all the wrong reasons. The 2021 Ray Guy award winner is one of the defendants in a civil suit alleging the gang-rape of a 17-year-old girl while Araiza was in college.

The Bills allegedly knew of the investigation prior to the news becoming public, but only cut Araiza last week following the news. He was named the team’s starting punter the week prior. While the Bills are now moving forward with other options, San Diego State is dealing with the fallout from the news.

Though the university doesn’t appear to be dealing with it all that well.

Wicker began by issuing a statement on the investigation. Hoke then read a prepared statement of his own.

But those in attendance say the pair declined to answer questions about the investigation. When faced with question, they opted to get up and leave the room.

#SDSU AD JD Wicker and football coach Brady Hoke just got up and walked out of a news conference because they wanted to discuss Saturday's football game, not the many questions swirling around the Matt Araiza gang-rape lawsuit.

Today's SDSU press conference ended early. JD Wicker and Brady Hoke read prepared statements and said they would not take questions regarding the sexual assault allegations. After a few questions were asked anyways, the two walked out. Video coming shortly.

Here’s video of @GoAztecs JD Wicker & Brady Hoke walking out of press conference on sexual assault allegations after multiple questions about assault. They said they would only talk football after initial statements. @nbcsandiego pic.twitter.com/tSWdARjnX4

Though Wicker did eventually return and answer questions on the matter.

JD Wicker says the school did not receive confirmation of the identities of the alleged suspects until the civil suit was filed.

JD Wicker firmly denies the anonymous tipster's claim that football coaches tried to sweep this incident under the rug because the football team was playing well.

Hoke eventually returned as well. Though unlike Wicker he did not answer questions regarding the investigation. Instead he intended to limit the discussion to the Aztecs’ upcoming season.

Araiza issued a statement on the case over the weekend. Though neither he nor the other two defendants, Zavier Leonard and Nowlin “Pa’a” Ewaliko, have spoken publicly. Neither Leonard nor Ewaliko are listed on the Aztecs’ 2022 roster despite remaining eligibility.