Is This Braves Fan Appearing To Take A Dive On Purpose To Let The Freeze Win Part Of A Bigger Conspiracy? 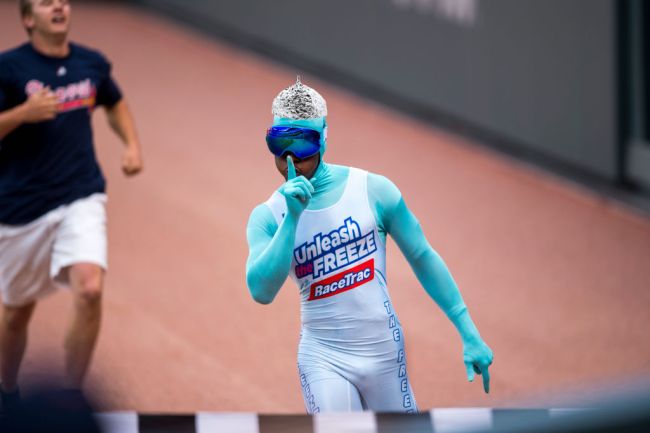 Not to get all Q’anon here, but I’ve been working on the internet too long and watched far too many Joe Rogan podcasts to believe that everything is exactly as it seems.

So allow me to put on my tinfoil cap and analyze the most recent installment of the Atlanta Braves wildly popular “Beat The Freeze” promotion at Truist Park.

It’s no small detail that The Freeze became a household name in 2017 after a cocky fan took a digger showboating before the finish line. The clip amassed 1 million 1 million views on MLB’s YouTube channel and was picked up by every sports media publication with an internet connection.

I’d have to imagine this organic publicity was beneficial for the gas station chain RaceTrac, whose name is plastered across its mascot’s mid-section for each run. Diggers sell. It’s Marketing 101.

Until yesterday I was willing to believe that these dives were totally spontaneous and a RaceTrac marketing employee was not greasing the participants pre-run.

But during the Yankees-Braves game Monday night, I can no longer suspend my belief.

Very believable dive in real speed, but upon closer review, where is the trip wire? He didn’t appear to be over his skis?

Fan bites the dust trying to Beat the Freeze. pic.twitter.com/Vk1lJJ52xi

When you look at it at 30% speed, it’s clear that the dude phantom plants his right foot and his body and face seem to give up at that very moment. No wide eyes. No “f*ck” utterance. Hardly an effort to get up and finish the race.

Don’t let the truth get in the way of a good tweet.

The Freeze winning that race at the last possible second when the guy inexplicably eats dirt is pretty suspect pic.twitter.com/RNWSyrOQYJ