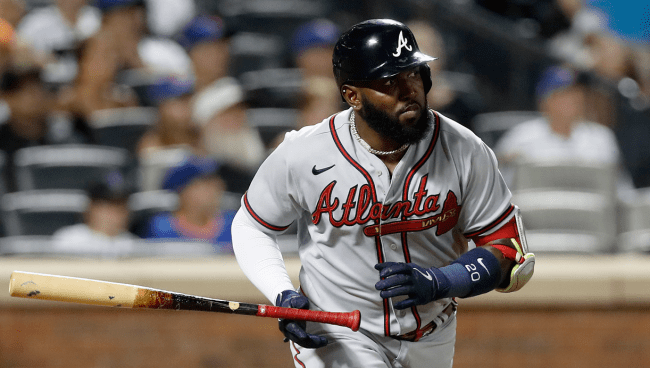 Atlanta Braves outfielder Marcell Ozuna was arrested again, this time at around 4:30 a.m. Friday morning on charges of driving under the influence and failure to maintain lane.

This is the second time in the past two years that Ozuna has been arrested by police in the Atlanta metropolitan area.

In 2021, Ozuna was arrested by the Sandy Springs Police Department after they visited his home and claimed to have witnessed him choke his wife, Genesis, after hearing screaming and then entering his home through the open front door. Police also claimed that Ozuna threw her against a wall then hit her with a cast that was on his left hand.

He was charged with felony aggravated assault by strangulation and family violence. The charges were later reduced to battery and simple assault with family violence enhancements. Major League Baseball placed Ozuna on administrative leave for the remainder of the 2021 season after playing in just 48 games and he ended up missing the Atlanta Braves’ World Series championship that fall.

In May, Ozuna apologized and told fans and teammates, “I’m going to give you the best and I’m going to be a better person.”

A year earlier, in June of 2020, Ozuna’s wife Genesis was arrested for domestic battery after reportedly hitting the Braves slugger in the face with a soap dish.

Ozuna is currently in the second year of a $65 million, four-year contract with the Braves. Should he complete the contract and be paid in full he will have made almost $100 million over 13 seasons in the Major Leagues.

The baseball world was shocked, angry and saddened to hear about Ozuna’s latest run-in with the law.

Welp, that’ll just about do it. Hope he gets the help he needs.

Cut him. Got a game vs the Astros tonight and he out drinking and driving at 4:30 in the morning. No wonder he has been useless in the lineup https://t.co/GZPTIzmSed

Attention all Braves: I will gladly drive you around all night for free in my minivan!

Imagine being this wealthy and spending your free time cruising around Gwinnett drunk at 4:30am on a Thursday.

Just remember this, every year he gets arrested, we win the World Series. 🤔