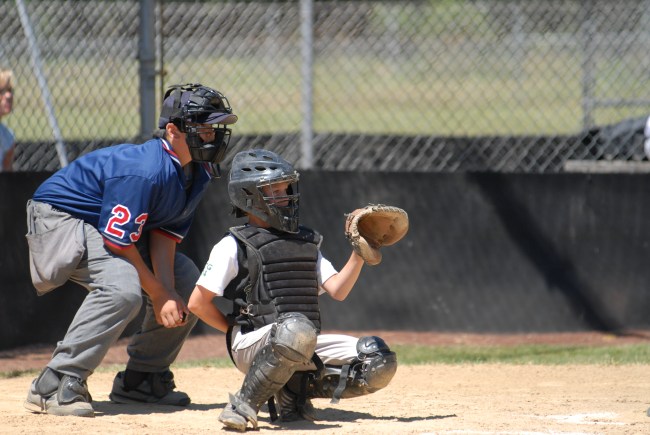 Is there a more humiliating experience than your wife and your young son watching you get pummeled in broad daylight over a call by a 13-year-old umpire? Just begging your wife to go to Dairy Queen on the way home to get something cold to put on your shiner while your 7-year-old son Google’s ‘How to change my last name’ in the backseat. If there’s a more shameful experience than that, my imagination is not vast enough to conceive it.

Oh, wait, actually, the only way that could be more mortifying if it was all captured on camera and posted on social media for the world to see how unstable you are.

The scene you are about to watch occurred at Westgate Elementary School in Lakewood, Colorado during a 7-year-olds’ baseball game. Apparently, the 13-year-old umpire was making some questionable calls behind the plate, causing strife between fathers of the opposing teams.

Keep your eyes on teal shorts absolutely bamboozling the dude in the navy t-shirt.

These adults took over the field and began assaulting each other on 6/15 during a youth baseball game. We're looking for any info, in particular to ID the man in the white shirt/teal shorts. Several people have already been cited in this fight and injuries were reported. pic.twitter.com/ieenhwCrbU

There were few minor injuries reported and one man (likely the dude in the navy) suffered serious bodily injury, police reported.

According to ABC News, police issued four citations for disorderly conduct, but said they are still searching for others involved in the brouhaha.

I wonder what all the kids were doing while their dads were blowing off some steam. I’d bet that they were all sitting on the bench eating hot dogs and playing on phones oblivious to what was happening around them. Make no mistake, this fight wasn’t about justice for the kids, it was about failed dreams of 30 grown ass men. Sad.