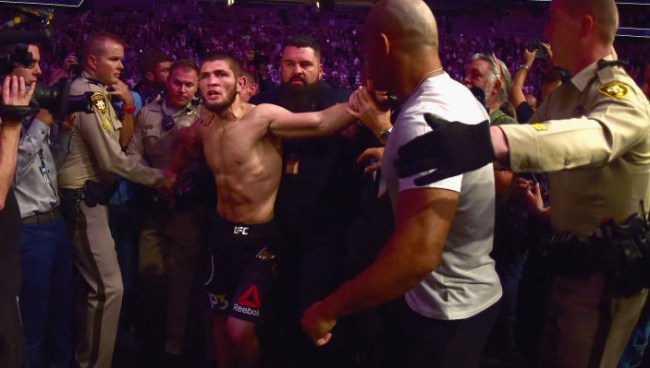 In an amazing act of prescience, ex-UFC fighter Brendan Schaub 100% accurately predicted a brawl in the crowd would happen three days before Conor McGregor vs. Khabib Nurmagomedov at UFC 229 in Las Vegas.

Appearing on The Joe Rogan Experience podcast last Wednesday, Schaub warned, “I would never go to this fight.”

“I would not go to this fight for this reason,” explained Schaub. “I’m a complete pu**y, I think something’s going to happen in the crowd between the Russians and the Irish.”

“Why do you think that?” asked Rogan.

“You wouldn’t go to this fight because of the potential that violence breaks out?” asked Rogan.

As we all know now, Schaub absolutely nailed it.

Schaub even doubled down on his prediction with an Instagram post the day of the fight, writing, “I’m telling you THIS fight is much much bigger than just Conor vs Khabib. Now give fired up Russian and Irish fans ALLLLLL day to drink and come to the fights tonight. Be safe tonight kids.”

Listen to his discussion with Rogan and more pre-game analysis of the fight below.

Meawhile, on Monday, McGregor posted a photo of himself with a nice little shiner and the caption, “We lost the match but won the battle. The war goes on.”