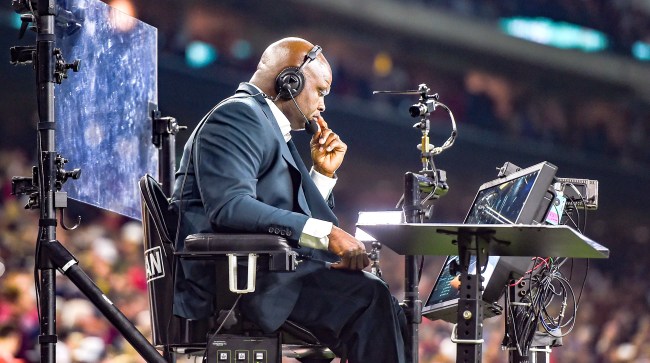 Jason Witten may have struggled (and he did) when he was in the booth doing games for Monday Night Football alongside Joe Tessitore and Booger McFarland, but at no point did anyone, let alone a former Pro Bowler go scorched on him for something he said during a broadcast.

This can now not be said for McFarland because four-time Pro Bowler Brent Jones, who played tight end for 11 years with the San Francisco 49ers, absolutely eviscerated him when he appeared on KNBR-680’s Tolbert, Krueger & Brooks show this week.

The main crux of Jones’ complaint was the fact that McFarland, who played defensive tackle in the NFL for eight seasons, kept asking Tessitore and the viewing audience if Jimmy Garoppolo had “arrived” or was “arriving” as a quarterback, as well as McFarland’s feeble attempt to break down Garoppolo’s throwing motion and mechanics.

The Garoppolo thing has me a little fired up. I really am frustrated with, you know, Snot Nose, or Loogie or Booger or whatever the guy’s name is. You know what? I try not to throw people under the bus most of the time, BUT, you are a very, very average defensive lineman your whole career and if I could pick anybody on a team that knows less about what’s truly going on offensively and defensively, it would be a defensive lineman. Rush the passer, stay in your lanes, play the gaps, tackle the guy. That’s it. You don’t care what coverage, you don’t care what linebackers are going. You might know a game or something you’re playing. You don’t know pass patterns, you don’t know what running backs are doing, you don’t know anything. So, I get it, he’s a guy that was left over because Jason Witten didn’t make it. But, dude, don’t come and bring your quarterback analysis into the prime time of Monday Night Football when you’re just a jag on a crappy team, you’re just a guy. That got me fired up last night.

You tell me about Jimmy Garoppolo and his mechanics or whatever and he’s just a little off, while on the flipside he’s like, “Oh Baker Mayfield, oh I like what Freddie Kitchens is doing, I like what the Browns; Oh Baker Mayfield has had some ups and downs tonight.”

So, I was not happy with that analysis at all. I have to say, I know he’s working hard and he’s trying. But he’s a defensive lineman that doesn’t know anything about the game and it’s a travesty that that’s Monday Night Football. Sorry.”

So… tell us how do you really feel about McFarland, Brent? Yikes.

Listen to the entire takedown below (it starts at the 7:30 mark) and be sure to tune in to Monday Night Football on November 11 when San Francisco plays Seattle to see if Booger has figured Garoppolo out by then.