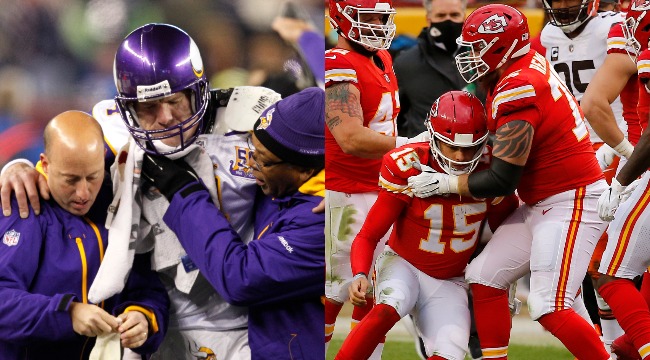 The Football Player would launch himself into a meat grinder to gain an extra inch in a preseason game.

The Retiree believes teenagers should not be playing tackle football until there is a functional treatment solution for concussions.

Favre, now 51, has gone on record saying he may have had “thousands” of concussions in his 18-year playing career, inclusive of what he referred to as dingers, seeing stars and ringing ears. He admits to being frightened about developing chronic traumatic encephalopathy (CTE) as he ages.

Favre caught up with TMZ about his disorienting injury against the Browns Sunday and is urging the 25-year-old to take more precautions with his health than he did.

“I played 321 straight games, it kind of goes against everything I stood for when I played. But, you got to be smart. You’ve got to be smart. I was never faced with a decision that he will potentially face this week. And ultimately the decision may fall on the doctors. And if they choose that he doesn’t play, then it’s the right move, because of the long-term damage.”

“When you’re in the moment and you’re young, you’re bullet proof. I’m 51 years old and I’m wondering what tomorrow will bring because of concussions more than anything…I urge him and all players to be extremely smart.”

Jay Glazer reported that Mahomes injuries were more closely related to symptoms similar to getting “choked out” than a concussion, a claim fans have either supported or challenged based on their respective allegiances.

He literally couldn't walk or stand up without help for 60 seconds pic.twitter.com/mAcfL9eDY0

Choked out? Ever tried jiu jitsu? Takes several seconds of a super tight hold to get choked out. Pat got knocked out.

Bull!
They’re trying to avoid concussion protocol, which would involve missing practice.
Who honestly thinks that loose contact to one side of his neck for less than a second cut off oxygen to his brain long enough to knock him out?

Why wouldn’t he come back in then? Seems odd.

Knew it. They were being cautious