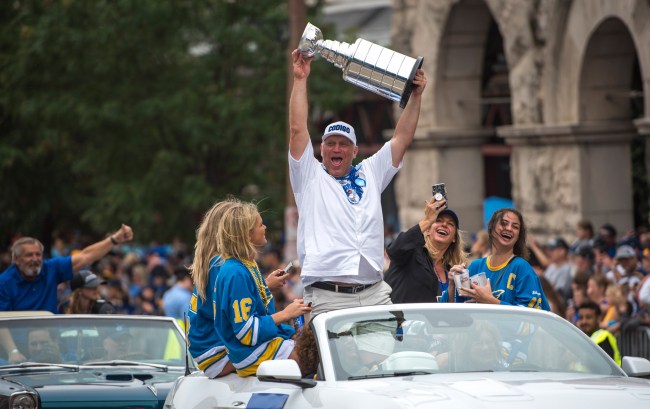 As a player, Brett Hull was pretty darn good. 741 goals. 8-time NHL All-Star. Inducted into the Hockey Hall of Fame. All while having to live up to the legend that was his own father, one of the greatest players of all time, Bobby Hull.

However, during the St. Louis Blues Stanley Cup victory parade, Brett Hull took his status as a legend to a whole new level.

Rocking a custom “Ric Flair Drip” t-shirt, trying to sing “Gloria” and attempting to get a chant of “We Went Blues” going during his speech at the celebration immediately turned the Hall of Famer into everyone’s favorite drunk uncle.

Brett Hull has turned into the Uncle you love to death, but are worried he's gonna ruin your wedding reception. 😂

Can you rent drunk brett hull for bdays/weddings?

Brett Hull is that one uncle at a #Punjabi wedding reception that is hammered even before the bride & groom arrive. https://t.co/XTFbfWQ2o9

And you know who always shows up at a wedding, right? In the case of Lucas and Meg Comeau, that same drunk uncle does.

You see, a year ago, Lucas and Meg planned to hold their wedding at the Old Cathedral of St. Louis. Little did they know that a year later there would be around 400,000 hockey fans surrounding the church on their wedding day.

Thankfully, the Blues made special accomodations for their guests to attend, providing them with a nearby parking lot and a shuttle system to transport their friends and family to the church.

Oh yeah, Blues owner Tom Stillman and, you guessed it, Brett Hull, showed up, WITH THE STANLEY CUP, to crash the wedding.