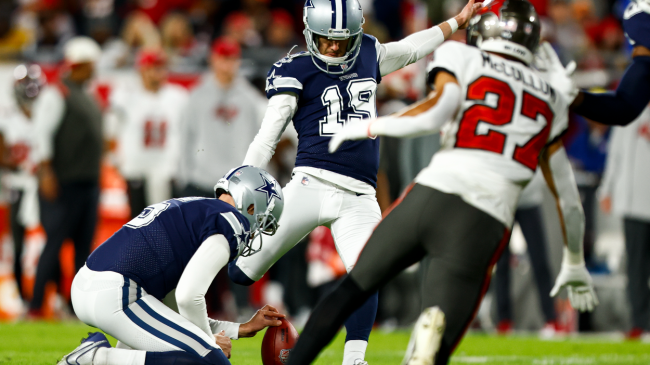 Brett Maher became the center of attention for all the wrong reasons on Monday night. Despite his team landing its first road playoff win in three decades, his performance was the focal point of criticism.

Maher had a historically bad night, missing four extra points in the Cowboys’ 31-14 win over the Bucs. Those missed kicks have many sports bettors upset.

The over/under for this postseason matchup closed at 45.5 points, and wouldn’t you know it, the game would end just shy of that total. A half-point short, in fact. With Maher botching four of his five PATs, many are now suggesting that there was motive behind the misses.

While this was likely just an awful case of the yips, some in the media insinuated that the kicker was point shaving. A plethora of notable football personalities jokingly posted their reactions to Maher’s miserable night online.

Is the kicker point shaving🤔

Robert Griffin III posted, “Aye we gotta check Brett Maher’s phone records at this point. Something is up.” He wasn’t the only one thinking it.

Luckily, the missed kicks didn’t come back to haunt the Dallas Cowboys. The team will now move on to the divisional round where they’ll square off in a heavyweight bout against the San Francisco 49ers. A chance for the Cowboys’ first NFC Championship appearance since 1995-96 will be on the line.

Hopefully, Maher can put this performance behind him.

Related: Mattress Mack picks Dallas to win the NFC after dreaming that the Cowboys would win three straight games