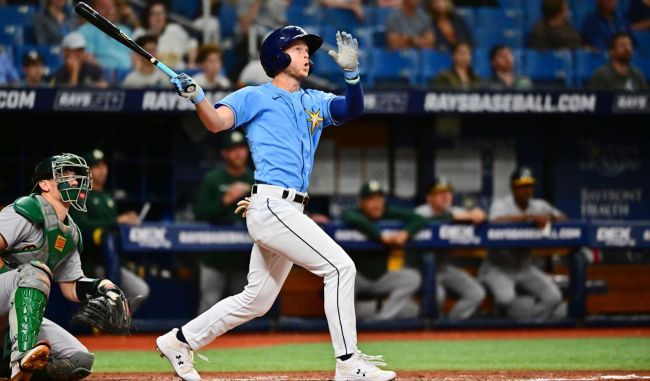 Tampa Bay Rays outfielder Brett Phillips has hit 24 home runs during his six-year career, with 13 of them coming last season in South Florida. It can be argued that none of them have mattered as much as the one he launched on Tuesday night against the Oakland A’s during Game 5 of a 162 game season.

In attendance at Tropicana Field last night was Chloe Grimes, a die-hard 8-year-old Rays fan who is unfortunately battling cancer for the second time in her young life. Chloe, whose favorite player is Phillips — “because he has the best smile, is always having fun” — not only got to throw out the first pitch to the utility man, but while she was being interviewed during the third inning, the 27-year-old launched a homerun beyond the right-field wall.

To make the moment even more emotional, when Chloe had met Phillips, she gave him “a mint green and white rubber bracelet” that said “Rally for Chloe our Princess Warrior”, according to MLB.com, and upon putting it on his wrist, Phillips promised that he’d try to do something special for her during the game.

Chloe Grimes, an 8-year-old @raysbaseball fan who is currently battling cancer, was on the call when her favorite player, Brett Phillips, hit a homer. ❤️ pic.twitter.com/5HGc8lfqSs

During his postgame interview, Phillips — who thinks that’s the hardest and furthest he’s ever hit a ball during his career — got emotional while discussing the straight-from-a-movie-esque moment, telling Chloe that she’s an inspiration:

“Chloe’s such an inspiration, and I wish her all the best. I’m praying for her and her family. I can’t imagine,” Phillips said. “It puts perspective on my career and my life and how I go about things. Just continue to pour love and respect just as she did. Going through what she’s going through, what an inspiration.”

Brett Phillips finds out about the magical moment that happened when Chloe was being interviewed while he hit a home run! @RaysBaseball #RaysUp pic.twitter.com/YpK1b2d5t5

As Brad Pitt famously said in 2011’s Moneyball, how can you not be romantic about baseball?