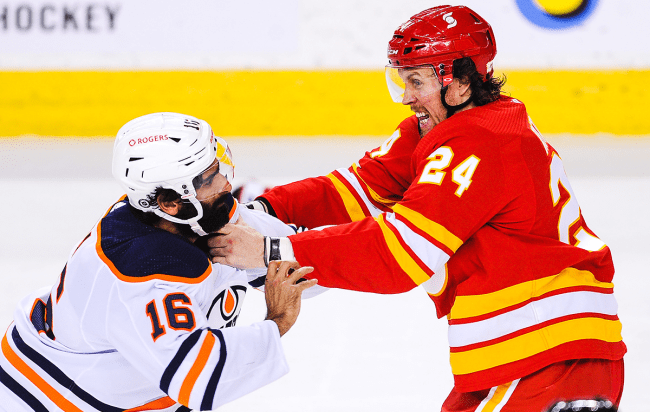 Football tends to dominate discussions concerning the long-term health risks of repeatedly having your brain bounce around the inside of your skull, but there have also been plenty of conversations concerning the dangers of hockey—especially in regard to whether or not fighting still has a place in the game.

In recent years, a number of former hockey players who primarily relied on their ability as an enforcer to stick around in the NHL have come forward to shine a light on the mental and physical toll that came with knowing their primary job was to hop on the ice at a moment’s notice and drop the gloves to deliver a dose of karma to opposing players in the form of a flurry of punches.

The hockey world has attempted to address this issue by instituting stricter rules to discourage fisticuffs at lower levels of the game, and while I’m not going to pretend my thirst for some good old-fashioned bloodsport doesn’t play a role in falling in the “pro-fights” camp, I’d also argue they play a valuable role when it comes to allowing teams to get retribution against players who pull a dickhead move that some time in the penalty box doesn’t come close to negating.

There are also incidents when challenging someone to throw down is really the only way to balance the scales if the officials manage to turn a blind eye to an obviously dirty play, like this hit to the head that Oilers forward Jujhar Khaira delivered to Oilers defenseman Oliver Kylington in the first period of their showdown on Monday.

if this isn't targeting the head I don't know what is now pic.twitter.com/nyzcZjm8rF

Khaira somehow managed to avoid any official discipline (although there’s a very good chance that will change after his upcoming hearing with the NHL’s Department of Player Safety,) and as a result, Brett Ritchie decided to use his face as a punching bag before delivering a devastating blow to end the scrap that sent a dazed Khaira to the locker room.

Jeez, Jujhar Khaira to the room after this punch from Brett Ritchie to end their fight pic.twitter.com/OPNJToCOzW

In addition to providing us with an instant classic, Ritchie also gave me the perfect opportunity to dive into the hockey fight annals to see where the knockout measures up to some of the best brawls we’ve ever been treated to.

We actually don’t have to travel too far back in time to find a similarly brutal KO that Barclay Goodrow treated Adam Erne to last week, where he was kind enough to hang onto the front of Erne’s jersey as he plummeted to the ice to save him from more damage to the head than Goodrow provided with the fist that hit him in the front of it.

That exchange serves as the perfect segue to one that took place between Kale Kessy and Derek Sheppard during an AHL game last year, which resulted in the former immediately signaling for a trainer to come out onto the ice after realizing the damage he’d managed to inflict.

Now, these could arguably belong in a category of their own, but there have also been a number of hockey fights that only needed a single punch to be decided, and while there’s no shortage to pick from, the left Aaron Downey threw to topple Jesse Boulerice might be the one to top them all.

With that said, Stu Grimson certainly deserves an honorable mention for putting Reid Simpson to sleep in 2000.

However, when it comes to the fight that managed to provide hockey fans with more pleasure than any other, nothing comes close to the joy virtually everyone on the planet felt after Evander Kane gave Matt Cooke—one of the dirtiest players to ever step onto the ice—a taste of his own medicine with an absolutely dirty right hand.

While all of the fights we’ve looked at so far have been fairly one-sided, I’d be remiss if I didn’t bring up the 2007 showdown where Donald Brashear found himself getting pummeled by Georges Laraque before somehow managing to turn the tides to bring things to an end.

It’s hard to believe fighting will ever actually be eliminated from the game, but at least we’ll always have these to fondly look back on if that ever turns out to be the case.