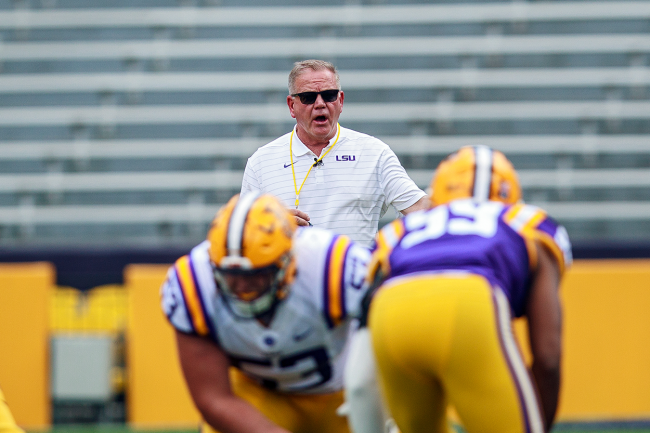 Brian Kelly left Notre Dame for LSU in November and changed the landscape of college football for the foreseeable future. As the head coach of the Fighting Irish, the 60-year-old went 92-39 with two College Football Playoff appearances.

However, Kelly apparently had one thing on his career bucket list that led him to taking the job in Baton Rouge. He wants to beat Nick Saban, who he has lost to twice in the last 10 years.

Most recently, Alabama played to a 31-14 win over Notre Dame in the 2021 College Football Playoff semifinal. Prior to that, in 2013, the Tide put a 42-14 beatdown on the Irish during the BCS National Championship game in Miami.

Clearly, neither game went well for Kelly. Now he wants his revenge and took the LSU job, in part, to get it. Money also helped, surely.

In a recent appearance on the Varsity House Podcast, Kelly shared that he never even visited Baton Rouge before accepting the job.

“I never visited. It was the alignment between the president, the athletic director and knowing that you were going to go into a program that had all those things in place. And you were going into a situation where you could compete with Alabama and Auburn and play those teams you wanted to go beat.”

Kelly also said that the challenge of coaching in the SEC was rather alluring. He claims that he has been told he would never make it in the Southeastern Conference because he is not from the South throughout his entire career and wants to prove people wrong.

“So, I know those facilities were in place. It was the challenge. It was the ultimate challenge to come down here after being in the Midwest my entire career where most people said, “Well, you can’t do that. You can’t go down there and win in the SEC. You’re not from there.’ So, it was probably the challenge to do it, and the alignment of an athletic director and president that were together in wanting to provide all the resources necessary to win a national championship.”

In addition, Kelly said that there is one big hurdle he wants to jump. He wants to beat that man that has kept him from winning a national title in the past.

Kelly will have his first opportunity to beat Saban when the Tigers host the Tide in Death Valley on November 5, 2022. Can he get it done?

Here is Kelly’s full interview with the Varsity House Podcast: