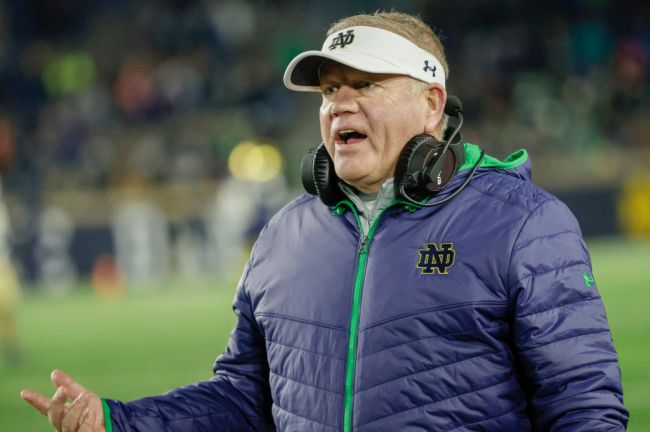 Brian Kelly is going to get paid extremely well to coach at Baton Rouge next season.

On Monday night, the college football world was stunned to learn that LSU was reportedly set to hire Notre Dame’s Brian Kelly.

Via Pete Thamel of Yahoo Sports

LSU is expected to hire Notre Dame’s Brian Kelly as its next head coach, sources tell Yahoo Sports. An announcement on the hiring could be made as early as Tuesday.

Kelly is in his 11th season at Notre Dame and has a 92–39 record at the school. The Fighting Irish are in the conversation to make the College Football Playoff this year after an 11-win season. They were ranked No. 6 by the CFP selection committee last week and beat Stanford 45-14 on Saturday.

The Tigers had agreed to part ways with former coach Ed Orgeron on Oct. 17 but kept him on to finish out the regular season. His tenure ended Saturday with an upset win over Texas A&M in Baton Rouge.

The decision comes after another seismic day on the college football coaching carousel as Lincoln Riley left Oklahoma for USC and Billy Napier left Louisiana for Florida on Sunday.

One report claims Kelly is going to make over $100 million for 10 years at LSU.

LSU's offer to Notre Dame coach Brian Kelly is a 10-year deal that will take him north of $100 million with incentives, sources tell @BrodyAMiller and me.

While another report says Kelly is going to make approximately $15 million/year.

Both numbers are wild and college football fans reacted accordingly.

$15M… time to break out my playbooks and apply for a coaching internship! 🤔🤔 https://t.co/MAXi1P8YKk

There is no planet in which a college football coach should make $15 million/year. https://t.co/jyC5n4ocuH

Gotta figure out a new word for bag because it’s not apt anymore for this cycle. FIFTEEN MILLION PER YEAR TO COACH COLLEGE FOOTBALL https://t.co/XLp4ZwYqqI

Early on Tuesday morning, Kelly’s contract details were confirmed by college football insider Brett McMurphy. He will make $95 million over the course of 10 years.

Brian Kelly receives 10-year, $95 million contract, plus incentives, at LSU. He will be formally introduced as Tigers’ coach at a Wednesday press conference