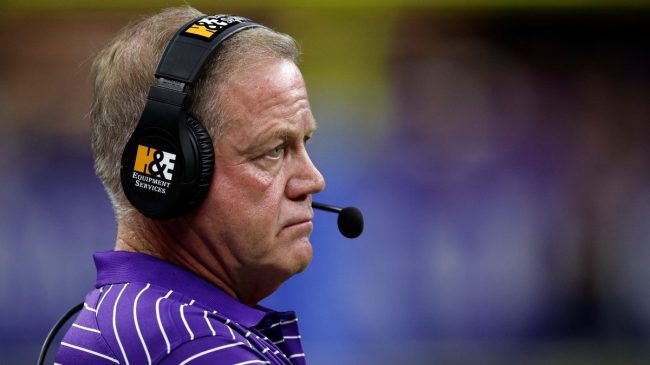 Week 1 of college football didn’t disappoint and neither did Sunday night’s featured game. The LSU Tigers and Florida State Seminoles went the distance for one in one of the most dramatic final minutes you’ll see in football. However, the loss might have scrambled Brian Kelly’s brain a tad, as the LSU head coach wasn’t making much sense afterward.

It just had to be heartbreaking coming back the way LSU did just to have the extra point blocked. The loss might have put Brian Kelly’s brain into a blender because he wasn’t making much sense. According to Bill Bender, Kelly claims, “We can’t play any worse than that; I don’t think. It’s my first game, maybe we can.”

Brian Kelly on telecast: “We can’t play any worse than that; I don’t think. It’s my first game, maybe we can.”

That’s quite the roller coaster of a response. We’re still kind of curious to know if Brian Kelly is still using his fake Louisianna accent. Either way, LSU can’t feel great after that insane loss to Florida State. I mean, just listen to the FSU radio call and you’ll get a better understanding of why Kelly is all over the place.

The city of New Orleans might be in the same state of mind as the LSU head coach. The city seemed dismayed after Florida State blocked the extra point attempt as Seminoles fans stormed the streets. Hopefully, Brian Kelly avoided traffic because his head might have exploded.

At the end of the day, it was a spectacular win for FSU. Brian Kelly and his team have a long way to go, but they put up a valiant effort to come back in the closing minutes of Sunday night’s game. They have nothing to be ashamed of and should bounce back this season.