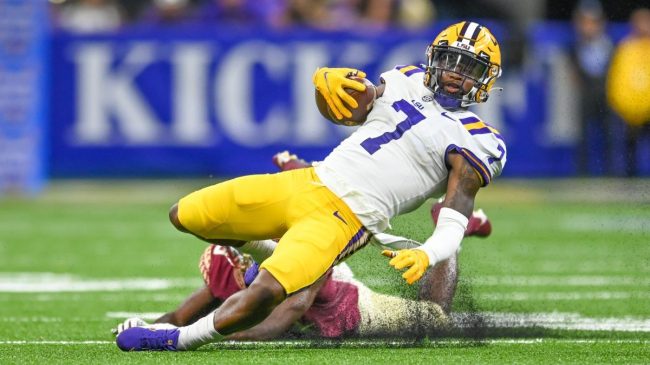 The start to the 2022 college football season could not have gone much worse for the LSU Tigers and first-year head coach Brian Kelly.

Kelly came to the Tigers is a shock move after spending the previous 11 years as the head coach of the Notre Dame Fighting Irish. He revamped the LSU coaching staff and much of a roster that went just 11-12 in the two seasons since winning it all in 2019.

But that didn’t seem to fix much on Sunday night.

Instead, the Tigers lost their season-opening matchup with Florida State in the most brutal way possible. After driving 99 yards to score a touchdown with no time remaining in regulation, LSU had its extra point attempt blocked and the Seminoles escaped with a 24-23 victory.

That might only be the start of the woes for Tigers’ fans.

Kayshon Boutte Deletes All Mentions Of LSU From His Instagram

LSU junior wide receiver Kayshon Boutte is one of the best players in the country at any position. Despite the team’s struggles, the Louisiana native caught 38 balls for 509 yards and nine touchdowns a year ago. Many predict he’ll be a first-round pick in the 2023 NFL Draft.

But Boutte didn’t have a strong start to new season. In fact, it was far from it.

Boutte caught just two passes for 20 yards, and media members quickly noticed that something was up.

This is going about as poorly as it could for LSU so far. Maason Smith injured, Kayshon Boutte looks unhappy, 122 total yards of offense.

3 points so far. The last time LSU failed to get double digit points in a head coach's debut was 1980 under Jerry Stovall per @ESPNStatsInfo

Kayshon Boutte looks like he’s done with all this shit. In game 1.

Kayshon Boutte didn't look like he even wanted to be out there all game.

As it turns out, there may have been even more than meets the eye to Boutte’s poor play. The Tigers’ star took to Instagram and quickly deleted all mention of the team from his bio following the game.

LSU WR Kayshon Boutte has deleted everything LSU related from his Instagram👀 pic.twitter.com/E0zagdUqcv

The bio remained that way as of Monday morning and could potentially serve as some transfer portal foreshadowing. Boutte could also follow in the footsteps of former LSU superstar Ja’Marr Chase and sit out the rest of the season.

Chase opted out of the 2020 COVID-plagued season and still went No. 5 overall to the Cincinnati Bengals in the 2021 NFL Draft. He then made the Pro Bowl and helped the Bengals reach the Super Bowl in his rookie season.

LSU beat reported Brody Miller of The Athletic has since claimed that the move has nothing to do with Boutte being discontent. Instead, he and teammates Malik Nabers and Kyren Lacy have all done the same. The move is part of the trio trying to focus in on the season.

In regard to #LSU receivers Kayshon Boutte, Malik Nabers and Kyren Lacy scrubbing their social media accounts last night, am told it was just them going dark on social media going forward after large negativity after Sunday's loss.

It looks like Tigers fans can take a deep breath for the time being.