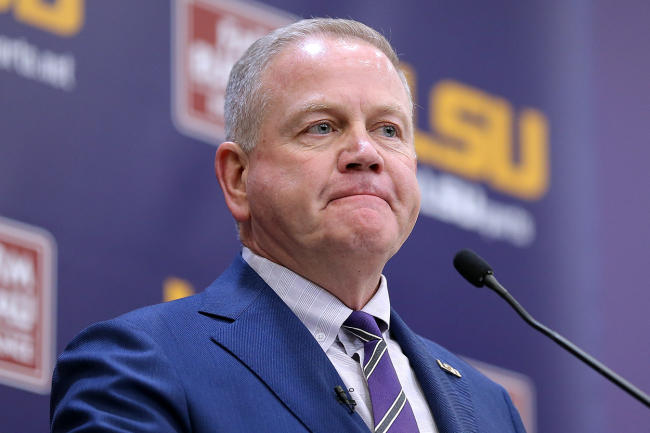 When Brian Kelly was reportedly hired as LSU’s next head football coach on Monday, it sent shockwaves around the college football world. Nobody, and I mean nobody, expected the move.

In addition to dropping jaws, the Tigers’ hire inspired quite a few thoughts. The internet was buzzing for almost three days for various reasons surrounding Kelly.

From Kelly allegedly ghosting his team, breaking up with the Irish over text, scheduling a 7:00am meeting to say goodbye, meeting with players for less than five minutes and getting out of South Bend ASAP, reactions were all over the place. Dan Wolken, unsurprisingly, was angry, Lou Holtz is upset, and Brady Quinn called the move desperate.

One of the main things that drew quite a bit of buzz was LSU’s announcement video.

The epitome of a winner.

The next championship head coach at LSU pic.twitter.com/RCtjdE8V71

The video included quite a bit of CGI/green screen work. On multiple instances, Kelly is shown in an environment that, in reality, he was not.

Matt Freeman of Irish Sports Daily did some investigating. Where did the video come from? How did LSU make its video the way that it did?

Well, as it would turn out, LSU not only stole Notre Dame’s coach, but also quite a bit of its video— as well as multiple other media entities. The legality of what LSU did is a very grey area.

More than likely, what the Tigers’ video department was within the boundaries of fair use. Others disagree.

My professional life is video production, and I can’t see how they did this legally.

However, regardless of the law, it is still rather astonishing how much video that LSU used to compile its announcement that was not its own.

Here is an illuminating side-by-side video that shows exactly where each clip came from:

Off the top of my head, I feel @grantgiszewski, @jessica_smetana and @verypiratey should have been hired by LSU to produce this Brian Kelly video. pic.twitter.com/iigYv0NeqG

Sorry, Notre Dame. LSU doesn’t care about what is yours— they’re taking it.