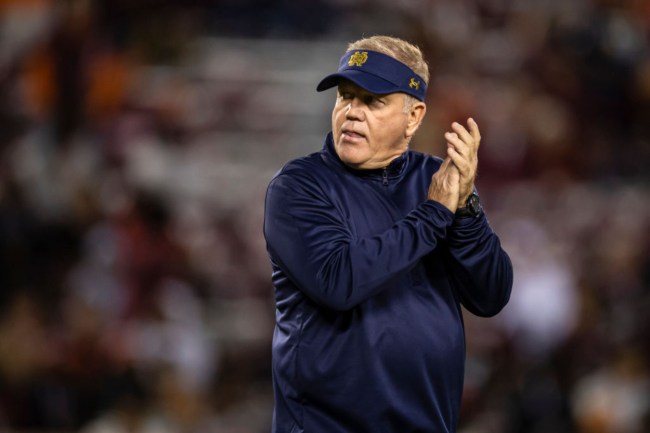 LSU appears to have its next head coach, and it’s none other than Notre Dame’s Brian Kelly, according to Pete Thamel of Yahoo Sports.

Kelly making the move to Baton Rouge is just the latest wild spin on the coaching carousel so far this week. LSU was reportedly interested in hiring Lincoln Riley from Oklahoma, but after he accepted the USC job and Billy Napier took the Florida job, the Tigers clearly had to come out swinging and appear to have gotten a big-time name in Kelly.

The 60-year-old Kelly has never coached in the SEC, so it will be interesting to see how he adjusts both on the sideline and how he handles the recruiting trail. The recruiting transition shouldn’t be much of one at all as he’s always recruited elite classes at Notre Dame and LSU certainly has the ability to recruit itself.

College football fans had quite the reaction to the news of Kelly being set to take over at LSU:

Big hire. Not surprised from Kelly’s perspective. Moving from no conference/no playoff guarantee to a conference with all-but-guaranteed playoff-bond champion. ND holier-than-thou attitude finally catching up with itself. #ItJustMeansMore #NotreDameNotreDameditself https://t.co/35ryeLUnEt

Huge hire. Not sure if he will pan out in the SEC gauntlet, but a big name headed to LSU. https://t.co/O7io2QVHPY

Today has been so much fun. Who needs reality TV when you have college football? https://t.co/5NzFvcMtUw

To say that Notre Dame coaches, admins and boosters I have spoken with in the last 15 minutes have been blindsided is an understatement. An absolutely shocking development in South Bend. https://t.co/Lnwk06Eqfu

Some major pieces have fallen in the college football coaching world and we’re not even to conference championship weekend; we’re due for more big developments in the coming weeks as well.

As for what direction Notre Dame may turn in hiring its next head coach, many are pointing to Cincinnati’s Luke Fickell. He’s been rumored to want the head coaching job in South Bend. The Irish of course isn’t afraid of hiring a Cincinnati head coach as Kelly was in charge of the Bearcats before he took over the program in South Bend.