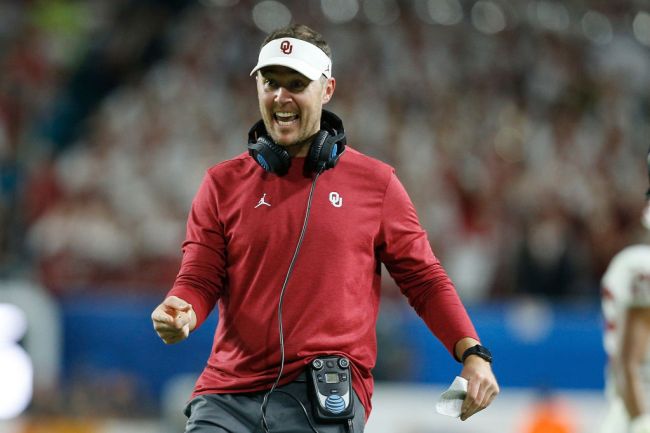 We have our first unconfirmed report on Lincoln Riley’s USC contract, and it’s pretty wild if true.

On Sunday, USC announced that he had snagged Riley away from the Oklahoma Sooners in a move that shook the college football world.

We got our guy.

According to Internet rumors, Riley is not only getting paid over $100 million to coach at USC, but he’s also getting several perks from the school.

These numbers are pure speculation considering USC has not officially released their contract terms with Riley, but the rumored contract has garnered plenty of reactions from the college football community.

That’s full scholarship w/ room & board if there ever was. Man makes $110M and will never make a mortgage payment or pay for travel again. He wasn’t afraid of the SEC. He’s got the best coaching deal in NCAA history. Who could turn that down? https://t.co/bBLOy9feHI

Is it too late for me to become a college football coach? https://t.co/o7GuapAcjf

Every coach in America hopes these numbers are true.

Is that thunder in the distance?
Nope, that's just Jimmy Sexton revving his engines. https://t.co/isMEuUrCAz

I suddenly have the career aspiration of coaching at USC https://t.co/y5Xn8gx4Jx

Congrats to the USC school of Accounting which will now be holding their yearly conference at two gleaming new homes in Norman, Oklahoma. https://t.co/CNW52YMZ6j

These terms look better than the ones the Roys accepted to maintain control of Waystar Royco. https://t.co/PPr6vKz6K1