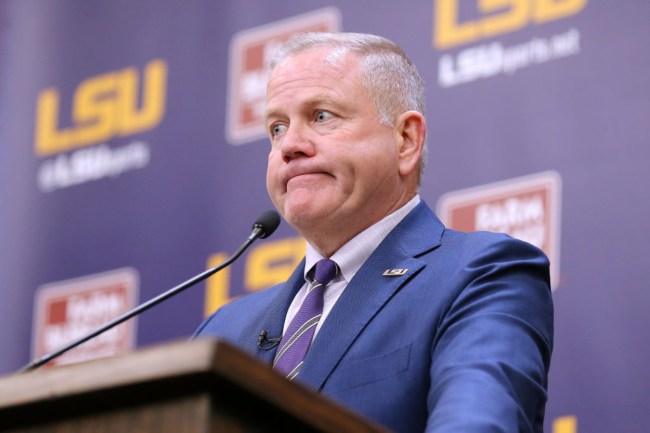 As more details, leaked videos, and text messages have been shared about Brian Kelly’s departure from Notre Dame to become the next head coach at LSU, two groups have seemed to form among the media and folks on social media.

You have one group of people that don’t care about the fact that Kelly sent a text message to his players letting them know he’d be leaving Notre Dame. That same group of people doesn’t care that he only gave about a five-minute speech to his players before be left for Baton Rouge. Those people understand that college football is a business, Kelly took a job he wanted, and secured a sizable bag of cash in the process.

Then you have folks, like USA Today columnist Dan Wolken, who think Kelly is a bad person for how he left Notre Dame. That group of people appears to have wanted Kelly to stick around a few days, hold meetings with each player, go to a few more mass services in South Bend, and leave town ‘respectfully.’

Kelly has a troubled past, you can read about one terrible incident here, but to whine about how he left Notre Dame for a better job and a huge pay raise is childish, boring, and tired. He didn’t leave a team of 8-year-olds behind in South Bend, he left a team full of young adults.

Wolken planting his flag in the ‘Kelly is a bad person for how he left Notre Dame’ camp is no surprise, however. He covers college football, despite the fact that he seems to despise the sport, and wants to see it change, drastically. Wolken doesn’t write about positive things, only negative things, and sticks to that agenda wholeheartedly.

Related: Scott Van Pelt Puts Dan Wolken In His Place After Ridiculous Tweet About College Football And The Virus

Let’s Talk About Our Feelings

Wolken joined MSN to talk about Kelly’s “embarrassing” exit and was his normal, chipper self insinuating that Kelly is just a bad guy and that his actions are par for the course for him.

“(His reputation) has definitely taken a hit, there’s no doubt about it,” Wolken began. “Certainly there’s no great way to leave a coaching job, we’ve seen over and over it can be awkward, contentious, but it can also be done well. It can be done in a way that doesn’t leave a lot of hard feelings.”

There it is! Let’s talk about feelings.

Sure, Kelly burned his bridge at Notre Dame with his exit, but who cares? He doesn’t have to worry about anyone’s feelings at Notre Dame ever again, he’s the head coach at LSU now. That may be a harsh thing to say, but it’s a fact.

“I just think, you do the breakup by text thing when you’ve recruited those kids to Notre Dame, they came to play for you. All they really get is a text and a seven o’clock meeting in the morning that lasted all of four minutes, it’s just not what you want,” Wolken continued.

“I don’t think it says a lot about Brian Kelly and his ability to just emotionally connect and cope with the situation.”

Emotionally connect and cope? Come on. He left a coaching job for another coaching job, he didn’t kill anyone.

“Maybe it’s just kind of who (Kelly) is, and that’s unfortunate,” Wolken explained.

The sun still came up in South Bend the day after Kelly left, I promise, Dan.