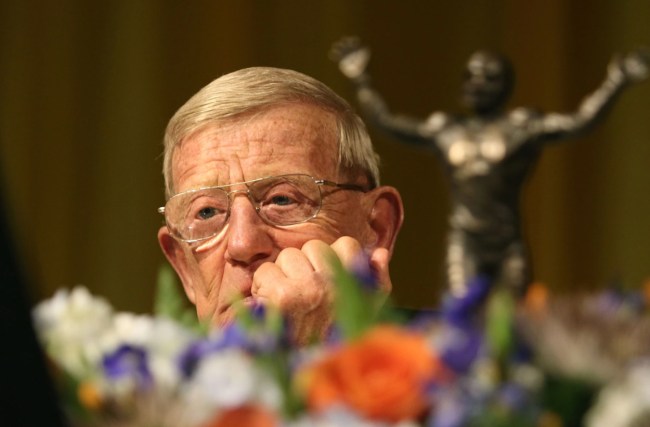 You’d be tough to find someone who loves and appreciates Notre Dame football more than Lou Holtz. He spent 11 seasons running the program and led the team to a national title in 1988 to go along with an impressive overall record of 100-30-2.

Given his rich history with the Fighting Irish and his legendary status in South Bend, it should come as no surprise that he’s extremely upset over Brian Kelly’s departure.

Holtz shared his reaction to Kelly leaving Notre Dame for the LSU job during an appearance on ‘The Crowd’s Line.’ The 84-year-old didn’t hold back, either, he took some direct shots at Kelly.

“He was there for 12 years. He did an excellent job,” Holtz said. “But I cannot think of one marquee win he’s had over a top-10 team… Other than he beat Clemson when they had the second-string quarterback ( in 2020). When Clemson played them again the same year with [Trevor] Lawrence, they dominated.”

You have to love the fact that Holtz pointed out Kelly’s lack of marquee wins and then backed that comment up with “he’s an excellent coach.”

Kelly is both the longest-tenured and the all-time winningest coach in Notre Dame history with a 92-39 overall record.

Holtz’s comment of “you just don’t leave Notre Dame” is as old-school as it gets, which I think we can all appreciate, but college football has changed.

It’s pretty clear that Kelly left Notre Dame for LSU for two main reasons. He wanted a huge pay raise and the chance to play in the best conference in college football.

Holtz Hates How Kelly Just Up And Left

Holtz was sure to point out how little money he made during his time at Notre Dame.

Kelly signed a 10-year, $95 million contract with LSU making him the highest-paid coach at a public university.

At the end of the day, Kelly simply wasn’t a Notre Dame man, according to Holtz, regardless of the fact he spent over a decade in South Bend.

“The other thing that bothered me about him… He never talked about Notre Dame and what really made it great,” Holtz said. “To be part of Notre Dame you have to talk about the Lady on the Dome, you’ve got to feel the spirit of Notre Dame, you just have to be a part of it.”

Good luck to Marcus Freeman, who is reportedly set to take over the Fighting Irish, hopefully, Holtz sees him as someone who “feels the spirit of Notre Dame.”