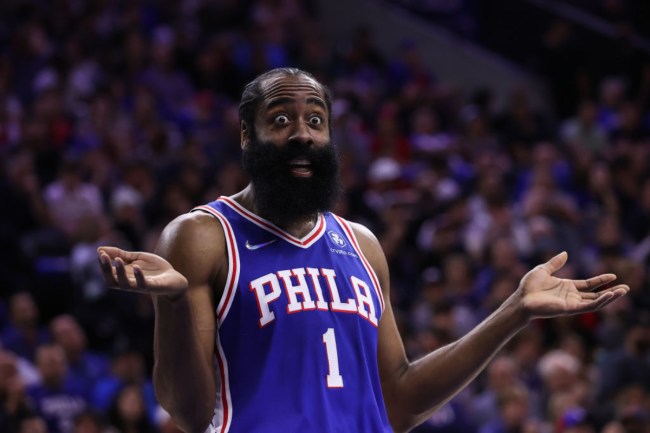 James Harden didn’t exactly help his future self at the negotiation table with his inconsistent play this season, particularly his performance throughout the playoffs.

Harden averaged just over 18 points in Philadelphia’s 12 playoff games this year, his lowest scoring average in the postseason in a decade. He took, and missed, just two shots during the second half of Philadelphia’s loss to the Heat in Game 6.

Scoring aside, Harden simply isn’t the same high-volume scorer or shooter the basketball world became accustomed to during his time with the Rockets.

Three or so years ago you’d be a fool to suggest Harden wasn’t worthy of a max contract, but now reality has completely flipped.

.@WindhorstESPN says to pump the brakes on Harden returning to Philadelphia next season with a max deal.

"Nobody in the NBA believes that the Sixers are going to give James Harden a max contract.” pic.twitter.com/vASDx6p0ek

“I think at this point, nobody in the NBA believes that the Sixers are going to give James Harden a max contract,” Windhorst said on Friday’s edition of ‘Get Up.’ “So the question is what is he willing to do?”

“You could look at what happened with Chris Paul last year with the Suns. He opted out of a $44 million deal this year and actually took a $14 million pay cut and then is taking another pay cut next year with the theory that the Suns are going to be able to keep that championship-level team together.”

“Is James Harden prepared to do that? Or will he just opt-in and say ‘I have a $47 million option, that’s what you’re gonna pay me.’ These are the questions that are going to happen over the next couple of months.”

As Windhorst eludes, this could come down to whether or not Harden is willing to take a pay cut in order for the Sixers to actually build something.

Related: Nets Coach Amar’e Stoudemire Rips James Harden For Being Out Of Shape, Questions His Determination