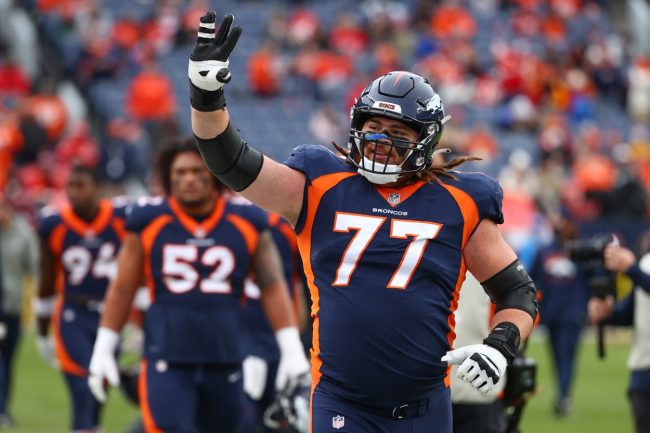 Denver Broncos rookie center Quinn Meinerz has made quite the impact during his first year in the NFL. Not only is he considered one of, if not the top value pick of the 2021 NFL Draft, but he can really shake a leg.

Meinerz, who stands 6-foot-3, 320 pounds has an incredibly unique story. He was not even ranked as a recruit out of high school and committed to D-III powerhouse Wisconsin-Whitewater.

While with the Warhawks, Meinerz was absolutely dominant. However, he had his senior year cancelled due to COVID-19 and did not have the opportunity to get an extra year of tape.

Despite his inability to play in 2020, Meinerz caught they eye of quite a few scouts. His unique offseason workout kept him in shape and made him stand out.

The unbelievable story of Quinn Meinerz

Watch til the end pic.twitter.com/lmmKgr7uea

After being invited to the Senior Bowl, he immediately began to rise up the draft boards. The same thing occurred after the NFL Combine.

As a result, Meinerz was drafted in the third round by the Broncos. From the moment he landed down in Denver, he made his presence felt both on and off of the field.

The Wisconsin-native earned the starting spot and absolutely dominated his opponents throughout the season. Just look at this VICIOUS pancake block from last week.

After going 7-10, the Broncos’ season ended on Sunday.

At year’s end, Meinerz took the time to reflect on his first year with the NFL. In his Instagram post, he shared a video from training camp.

Most NFL teams have rookies partake in a talent show prior to the season and Denver does not appear to be the exception. Meinerz took the stage and performed the dance from Napoleon Dynamite.

Donned in the proper plain white t-shirt and jeans, it was awesome. Take a look:

This was not the only time that we saw Meinerz break out his dance moves. He also shook a leg during practice in August.

Clearly, Meinerz is not afraid to be unapologetically himself. How can you not love him?!