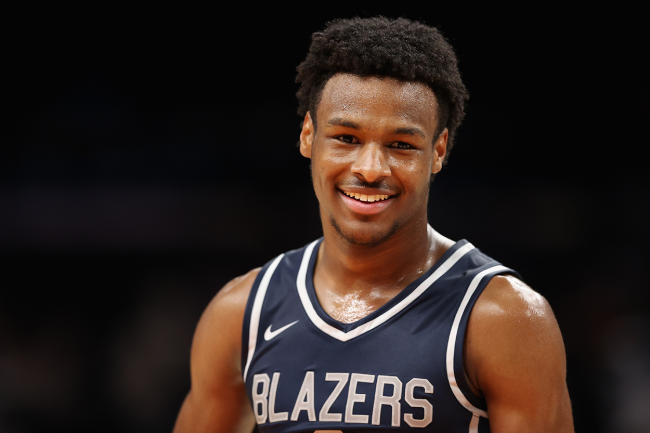 LeBron James Jr., better known as ‘Bronny,’ is the biggest name in the college basketball recruiting Class of 2023. But that doesn’t mean that he’s the best.

In fact, over the course of the last few months, Bronny James has dropped 30 spots in the Rivals class rankings. His father, LeBron, appeared to respond to the drop in rankings with a pretty lit highlight tape.

Meanwhile, Bronny silenced the haters with a strong performance at the Nike Peach Jam over the weekend. He put on a show on Sunday as team Strive for Greatness beat Alabama Fusion on Day 1 of the event.

In one clip from the afternoon, Bronny put his iso defender on skates, cut left to the hoop and laid in a short floater. He had the ball on a string and crossed up his man behind-the-back. It was a great sequence of handles.

Not long thereafter, Bronny made himself heard. Not literally, but his dunk echoed across the gym and across the internet.

Coming down the court, Bronny went up for an alley-oop. As he went up, he was fouled extremely hard at the rim. But it didn’t matter, the 6-foot-3, 190-pound guard finished with a poster anyway.

Well, at least he would have. He accidentally punched out his own dunk as a result of the foul. It still counted, but it wasn’t quite as vicious.

Bronny and his team will try to continue the success at the Nike Peach Jame this week. Should they keep winning, the championship game will be held on Sunday, July 24th.