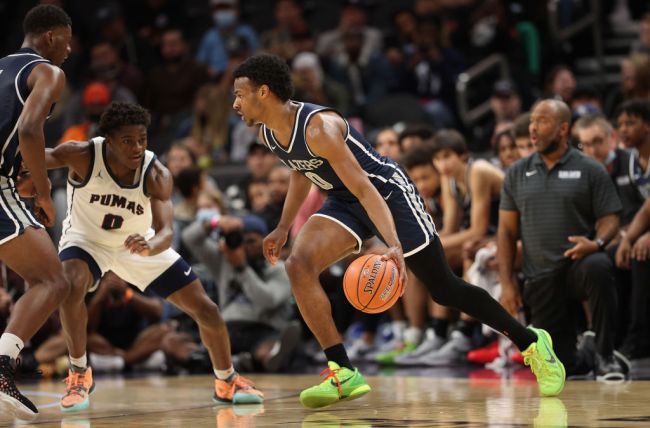 The Bronny James reports just keep coming. There had seemingly been little news about Bronny’s recruitment heading into his senior year of high school until about a week ago.

That was when a report surfaced that he was being recruited by UCLA, USC, Oregon, Michigan, and Ohio State. A later report would claim that Oregon was the favorite to get a commitment from Bronny, but LeBron James denied that report.

Yesterday, another big program was reported to have joined the chase for Bronny. Memphis was the new program to join the list and today, a new report from On3’s Joe Tipton revealed that Memphis has made an offer to Bronny.

If Memphis did get a commitment from Bronny, he would be the first signing of their 2023 class.

It isn’t all that surprising to see Memphis involved in the recruiting of Bronny James considering he will play high school basketball with Penny Hardaway’s son, Ashton, this year.

Bronny has been creating a ton of buzz over the past week on his team’s exhibition tour of Europe. First, there was that monster dunk that somehow didn’t manage to impress Skip Bayless.

He followed that up with an impressive chase down block that many fans compared to his father’s famous block during Game 7 of the 2016 NBA Finals.

Bronny was always expected to get plenty of attention during his recruitment, but highlights like these could quickly turn him into one of the biggest recruits in the class of 2023.