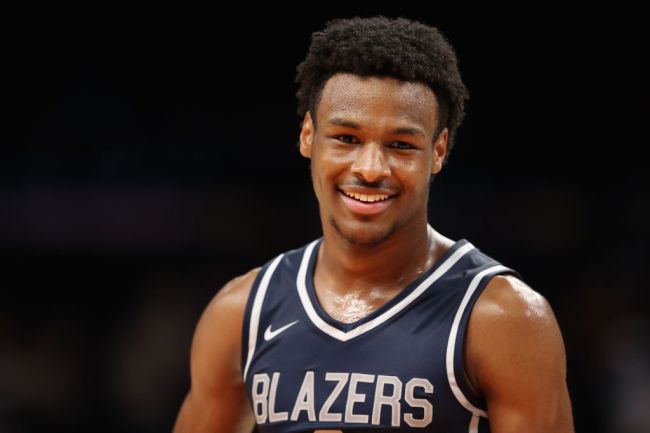 It looks like there’s another big college basketball program who is joining the chase for Bronny James.

Despite the fact that this year will be Bronny’s senior season of high school basketball, it somehow took until last week for reports to begin surfacing about his recruitment.

LeBron James has since cast doubt on that report.

He hasn’t taken 1 visit yet and has only had a few calls with coaches and universities. When Bronny makes his choice you’ll hear it from him. #JamesGang👑 https://t.co/BBciKxl7m8

Now, On3’s Jamie Shaw is reporting that a new team has gotten involved in Bronny’s recruitment. According to the report, Memphis is now recruiting Bronny James.

Memphis actually has one thing working in their favor in a big way when it comes to the recruitment of Bronny James. Ashton Hardaway, the son of Memphis head coach Penny Hardaway, will play basketball alongside Bronny at Sierra Canyon next season.

That certainly won’t hurt Memphis’ chances of landing Bronny. The school has also had a pretty strong recruiting history under Penny Hardaway. Memphis has the nation’s top recruiting class in both 2019 and 2021, landing big names like James Wiseman, Precious Achiuwa, Emoni Bates, and Jalen Duren.

The recruitment of Bronny is sure to continue heating up with every highlight reel moment and he has plenty of those lately. Between his emphatic dunk the other day and this morning’s chase down block, he has been providing plenty of them lately.

We’ll just have to wait and see if Memphis’ head coach sitting courtside for each of those moments during the high school season has any impact on where he plays college basketball.