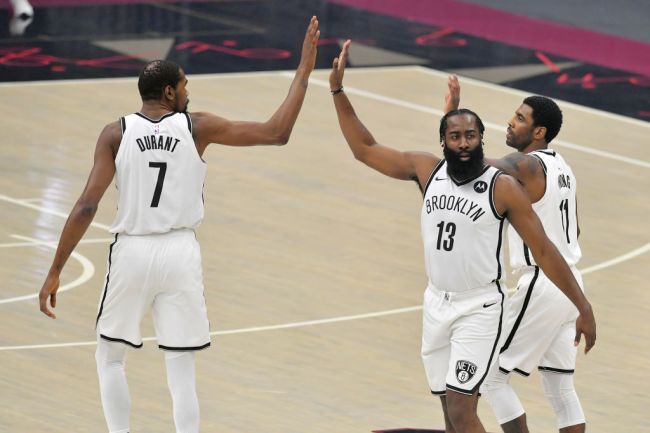 The Brooklyn Nets apparently go above and beyond to make sure their superstar players are taken care of off the court.

During an interview with Dan Le Batard, Brooklyn Nets insider Matt Sulllivan, who recently wrote a book called Can’t Knock the Hustle: Inside the Season of Protest, Pandemic, and Progress with the Brooklyn Nets’ Superstars of Tomorrow, said the team would pay to rent out houses for players’ side chicks and girlfriends.

“A very high-ranking official with the Nets who had a lot to do with the money said basically, there’s a blank check as soon as these guys got here – whether that’s buying a girlfriend or a girlfriend on the side a house in California for a week, whether that’s just putting up money for the boys and the homeboys and equipment for random s***, they’re totally cool with that.

Just renting a house on the team dime. These guys don’t pay for a lot of personal stuff themselves. And so, the financial team of the Nets would kind of come every week or so, they’d be like, “OK, we thought we had this under control. We’ve got to redo the budgets every week.” And they were like it was just a new thing every damn time.”

A stunned Le Batard noted that a team renting out houses for side chicks and girlfriends would likely violate the league’s salary cap rules. Sullivan responded to Le Batard by saying the team doesn’t care and wants to gain reputation among players as a “modern franchise”, Sullivan goes on to point out that the team even broke Covid protocol during the offseason to get Kevin Durant ad Kyrie Irving to work out with each other.

There’s a lot of things that the Nets do that aren’t kosher. There’s a reason they have this kind of kremlin-esque wall around everything they do. During the middle of COVID, they were working out half the team – well, really, Kyrie, KD and their friends on the team – out in Kobe’s old gym in California. You weren’t allowed to do that during COVID.

They were running a secret camp the whole time, trying to get Kyrie and KD in shape.

The NBA usually takes accusations of salary cap circumvention very seriously and will likely look into the Nets after Sullivan’s report.