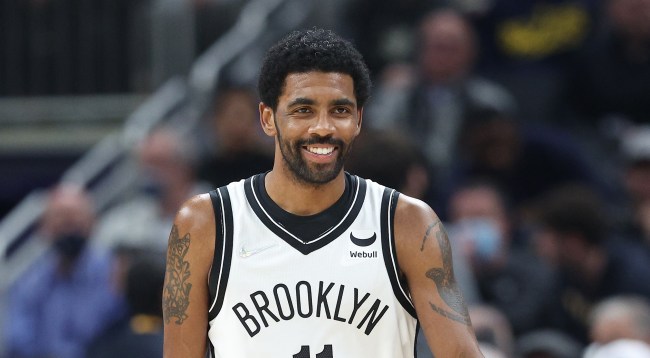 The Brooklyn Nets have spent most of this season without Kyrie Irving because of mandates in New York. However, they recently brought him back to the team to play road games. He is still unavailable for home games, but that could change.

It would appear that there is a solution for Kyrie Irving and the Brooklyn Nets. All the Nets would have to do to get Kyrie back for home games would be to pay a fine after every game.

They’d start with a warning after the first game before getting hit with a $1000 fine after the second game. That fine would go up to $2000 for the third offense and $5000 for every offense from there.

It could cost the Nets 5k a game in fines to play Kyrie at home. Is it worth it? 🤔 pic.twitter.com/fqn1M58mFA

It would not be a popular move from a publicity standpoint, but it is still a possibility to get Kyrie Irving back full-time. I doubt the Nets would take the PR hit during the regular season, but I absolutely would not put it past a pro sports organization to decide to make the move during the playoffs.

The Nets’ billionaire owner certainly wouldn’t bat an eye at the money he’d have to pay in fines. At most, the Brooklyn Nets would play 16 home playoff games. That would mean it would cost at most $78000 for Kyrie Irving to play every home playoff game.

It would be interesting to see if the Nets were willing to make the move in the playoffs. They’ll need Kyrie Irving to give them a shot at an NBA title and could very well see that possibility as being way more valuable than the optics issues of having him play.

Now that we know there’s a path out there, everybody will be watching to see what the Brooklyn Nets are willing to do to give themselves a shot at a ring.