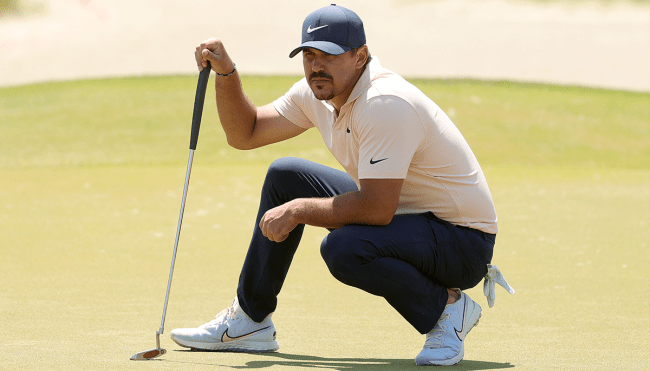 The passage of time makes it easy to forget just how insane some news stories from the past are, as your brain can only spend so long trying to process the impossible bizarreness of a significant event before accepting that it happened and turning its attention to the next one in line.

For example, you’re probably aware that Tonya Harding knew about her ex-husband’s plot to pay two men to smash Nancy Kerrigan’s knee with a baton at a figure skating competition in 1994. The shock of the attack has obviously worn off now that more than 25 years have passed, but it’s still absolutely wild that such a situation ever transpired in the first place.

On Sunday, Brooks Koepka found himself dealing with a slightly less serious knee issue at the PGA Championship after he and Phil Mickelson were swarmed by fans scrambling to watch Lefty secure his unlikely victory on the 18th hole.

This was the scene at the 18th when we lost Phil Mickelson and Brooks Koepka in the crowd. Wait till the end…👍🏻 #PGAChampionship pic.twitter.com/jhsmsLWPD4

After the tournament wrapped up, Koepka spoke with reporters and revealed he’d aggravated the left knee he had surgery on just two months ago after some spectators threw the concept of social distancing and personal space to the wind.

Brooks Koepka got swallowed up in that crowd…and was NOT happy about it.

However, things took an interesting turn when the golfer seemed to imply he’d been purposefully targeted by someone in the crowd before stopping himself, saying, “I don’t know, it felt somebody tried to…I don’t know what the deal was, but it’s what it is.”

It’s hard to imagine Koepka honestly believes a malicious actor was roaming the course on Sunday waiting for the ideal moment to strike, and the fact that he cut himself off would suggest he simply got caught up in an understandably frustrating moment.

With that said, part of me is hoping that’s exactly what happened thanks to the drama we’d be treated to.