Brooks Koepka Had The Biggest Payday In Golf History After Winning The U.S. Open 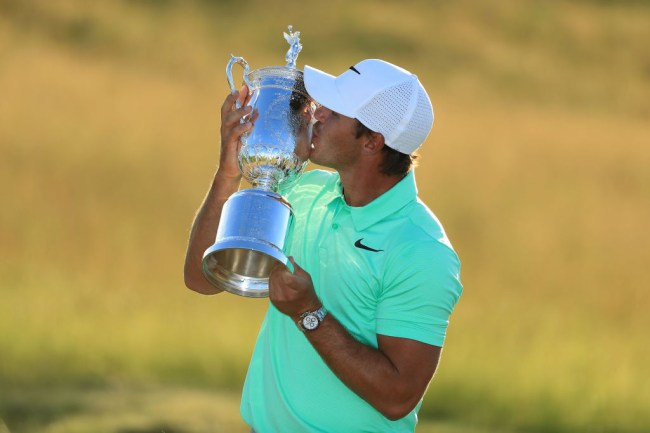 The U.S. Open at Erin Hills wrapped up yesterday afternoon. When the last putt was sunk on 18, Florida State University alumni Brooks Koepka was crowned champion and held the U.S. Open Championship Trophy high in the sky. Brooks fired off a 5-under final round of 67 to hold off any challengers, and in doing so he managed to take home the single largest payday in the history of golf.

Brooks Koepka? Yesterday, Brooks Koepka took home an astounding $2,160,000 for winning the first U.S. Open at Erin Hills. When Dustin Johnson won the U.S. Open last year at Oakmont his winning share of the prize pool was $1.8 million (same for Jordan Spieth in 2015). In one year that winner’s shared jumped by $360,000, and Brooks Koepka can lay claim to the single largest payday in golf history. How’d Brooks celebrate his $2.16 million day?

Lost in the shuffle of Brooks Koepka’s U.S. Open win was Fox Sports commentator Joe Buck making a total ass out of himself while Brooks was celebrating. Joe mixed up the names of Brooks’ current and ex-girlfriends, calling the woman Brooks was with by his ex-girlfriend’s name:

Will Joe Buck or Fox Sports publicly apologize to Brooks Koepka or his girlfriend? No chance. Will Joe Buck be back in the booth for next year’s U.S. Open to make an ass out of himself again? Absolutely.