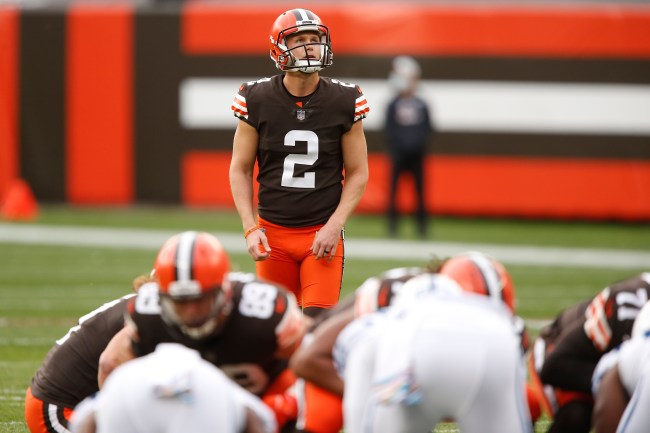 The Browns had an up and down game against the Cincinnati Bengals on Sunday, toying with the emotions of every single fan (like myself) who tuned in to see the thrilling victory. First, Odell Beckham Jr. tears his ACL on the first passing play of the game. Then the Browns trail at halftime against a pitiful Cincy team. Finally, Baker Mayfield completes 22-straight passes and tosses five touchdown passes for a last-second win — but even then there was some added drama.

That’s because Browns kicker Cody Parkey had to do the one thing he’s literally paid to do: Kick a football through yellow uprights to give Cleveland a four-point lead. As anyone who watched the game, or any sports gambler who bet on the game, knows, Parkey missed the critical PAT, only putting the Brownies up by three points instead of four.

Now this wouldn’t be a huge deal had the betting line been not been Browns at -3.5. Unfortunately, Parkey’s missed PAT was heartbreaking for the tons of sports gamblers who happily took that spread in hopes of seeing some money come pouring in. Just take a look below at what some people on Twitter were saying after the placekicker ruined the chance at cash for them.

Cody parkey misses the extra point to give me browns -3.5 and bust my parlay. Thanks man!!!

Cody Parkey … thanks man, that missed extra point only cost me a couple thousand. No problem

Talk about a bad beat.. the Browns kicker missing that XP ruins my chance at $1500 @PatMcAfeeShow @HammerDAHN @FDSportsbook 🙃🤡 pic.twitter.com/L4CtGSjR9O

The browns missed Kick ruined $600 for me!! 😭😭😭😭
The worst bad beat of my life 🤮🤮🤮@notthefakeSVP pic.twitter.com/ChYuTEJC9X

Cody parkey has robbed me of $150 after missing the extra point so the browns don't cover -3.5. FML

When you have the Browns -3.5 and Cody Parkey misses an extra point #BadBeats #CLEvsCIN pic.twitter.com/dTtDWSDzyV

A lot of those near victories from the Browns game are bad — especially since they occurred from a missed PAT — but I’m not sure any of them are as bad as the more than $14,000 that one sports gambler missed out on during last week’s Thursday Night Football game between the Giants and Eagles. As I wrote a few days ago, one person missed out on loads of cash because the TURF MONSTERS got New York quarterback Daniel Jones during an open field rush that was headed for a touchdown. Yikes.

Allow both of these instances serve as a reminder that life isn’t fair, but sports gambling can be straight up mean. One guy trips over his own feet, and another dude misses a simple PAT after a last-second score; how can anybody explain these? Unless you’re a sports gambler, you can’t. Only in sports, man.