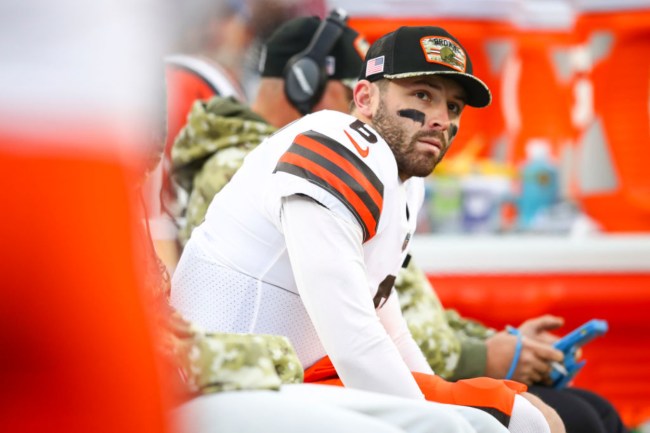 It’s been an eventful season thus far for Baker Mayfield as he’s battled injuries for the majority of the year while searching for both himself and his team to find consistency.

While his injuries have created headlines this season, and rightly so, he’s made it clear that his health isn’t the only thing potentially holding himself and this Cleveland team back.

Mayfield sat down with Kurt Warner ahead of the Browns’ matchup against the Baltimore Ravens on Sunday and the QB hinted at “internal” problems with the organization.

“It comes down to trying to find an even balance of listening to those opinions around you that truly matter — friends, family, teammates,” Mayfield explained. “That’s been the tricky part about this year. There’s been a lot of internal things. It hasn’t been just outside noise. I have to be myself and try to do my job at 100 percent.”

"It's night and day compared to where I was heading into last week" @bakermayfield sat down with @kurt13warner to talk about how he and the @Browns will finish up the season 👇 pic.twitter.com/YBPgVDjVPM

Mayfield didn’t expand on what those “internal things” were that he’s had to deal with this season, but his comments do back up a report from Cleveland.com’s Mary Kay Cabot.

She reported on Sunday that there has been “a disconnect all season between Mayfield and Kevin Stefanski in terms of playcalling.”

Mayfield and the Browns seemed to have taken care of a few of those internal problems on Sunday as they were able to knock off the Ravens 24-22 at home.

Nevertheless, Stefanski was asked about Mayfield’s “internal things” comment and explained that he and Mayfield have a good line of communication.

#Browns Kevin Stefanski on Baker Mayfield alluding to “a lot of internal things” within the team that have been tricky for him this season pic.twitter.com/cuaP83Ee8p

Winning of course heals all, so if the Browns can go on a winning streak and beat the Raiders on Saturday then this ‘drama’ may be put to rest.