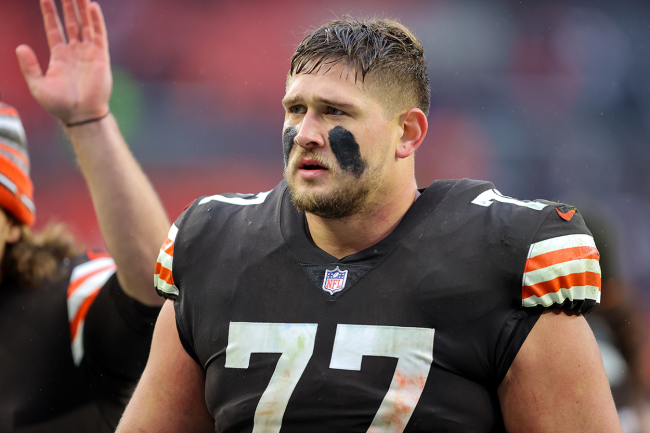 Wyatt Teller has been in the NFL since 2018 and continues to play well above his fifth round draft position. The 6-foot-4, 315-pound Virginia-native is also an instant fan favorite after a cool moment at Virginia Tech over the weekend.

Teller, who played for the Hokies in college, was back in Blacksburg for the Virginia Tech spring game earlier this month. While there, he attended an event called #SpringJam and saw a fan at the bar wearing his jersey.

It’s not often that football fans rock an offensive lineman jersey, so Teller had to make sure and show some love. Teller was on the second floor of the bar and noticed the fan. He proceeded to walk down the stairs and through the crowd to say hello to the fan.

As it would turn out, the person wearing Teller’s jersey was a nearby high school coach. Coleman Calloway, a coach at Thomas Jefferson High School, uses Wyatt’s film to teach his players footwork, technique and field vision.

He is a huge Teller fan, so when the second-team All-Pro tapped on his shoulder, he was thrilled to see who he was. Although he was a bit confused at first, Calloway quickly came to his senses, realized who it was that tapped him on the shoulder and the two shared a pretty neat moment.

A video from the event captured the very cool moment on camera.

Watch this video of a really awesome interaction from #SpringJam. See the following tweet for context of the moment ⬇️👀 pic.twitter.com/E0bn5QFyI4

Again, while it’s rare that fans wear a lineman’s jersey, Teller didn’t have to take the time to go and meet Coleman. But he did and that speaks wonders about who he is.

I, for one, will be a Teller fan for life after seeing that exchange.