Bruce Arians Thinks Blaine Gabbert Is The Most Underrated Player In The NFL, Seriously 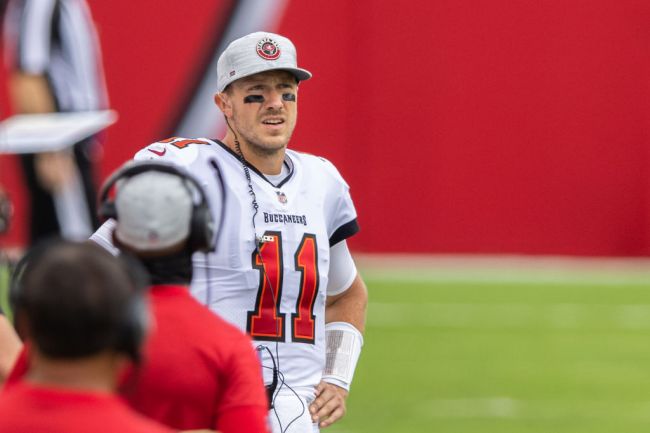 When you think about the most underrated players in the NFL, your mind probably doesn’t wander to any backup quarterbacks, but Bruce Arians’ does.

The Buccaneers’ head coach not only has the pleasure of coaching the greatest quarterback to ever do it, Tom Brady, but he also gets to coach the most underrated player in the entire league, Blaine Gabbert. His words, not mine.

Arians recently appeared on the ‘Pewter Report Podcast‘ and was asked whether he may retire whenever Brady elects to hang it up. He explained that he likely wouldn’t follow Brady into retirement, and a big reason for that would be that he could potentially work with the underrated Gabbert.

“I could get extremely excited about having another young quarterback and going to war with one,” Arians said. “I’ll be honest with you. I’d be excited to take Blaine Gabbert to war because I love Blaine Gabbert. I think he is the most underrated player in the NFL. So yeah, when it’s not fun, then it will be time.”

Arians and Gabbert have a bit of a history together that goes beyond Tampa Bay. The former first-round pick played five games for the Cardinals in 2017 when Arians was still the head coach in Arizona. He’s obviously seen much more from Gabbert at practice and behind the scenes than anyone else, he’s not solely basing this bold statement around his not-so-great career numbers.

Gabbert was drafted 10th overall by the Jaguars in 2011 and has suited up for five different teams since. While you could label him a bust, he’s managed to stay in the league all this time and play in 60 games, which is worth something.

The Bucs selected QB Kyle Trask in the 2021 NFL Draft, so Gabbert will have some competition for the QB2 spot this season, but it’s clear that he has all the confidence to be that guy from his head coach.