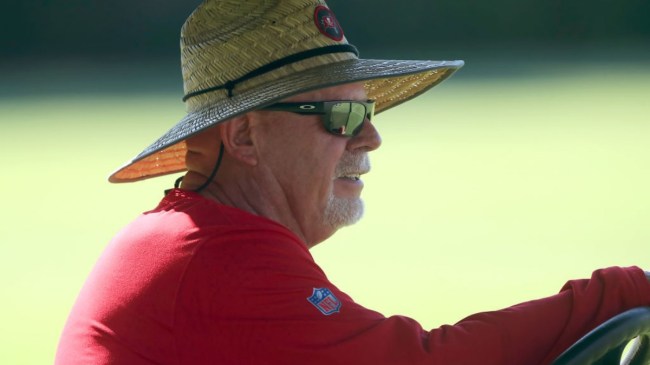 Over the course of his career as an NFL coach, Bruce Arians had the pleasure of coaching some of the greatest talents the game has ever seen while also facing the challenge of coaching some its biggest characters.

Even just last season, Arians had the NFL’s GOAT on a roster that also featured big personalities in Rob Gronkowski and Antonio Brown.

So who is the most interesting player Arians has ever coached?

He spoke to The Spun’s Chris Rosvoglou and surprisingly revealed that the answer is Rob Gronkowski.

A lot has been going on with the Bucs since Bruce Arians stepped away from coaching.

Our @RosvoglouReport caught up with the former NFL coach on his new role, if he'll coach again, Tom Brady's un-retirement and more: https://t.co/uHmXecaUPQ

“It would definitely be Gronk. We’ve had quite a few personalities in the last few years. But I will say, the beauty of our ballclub is everyone checks their ego at the door.”

Gronk and Arians spent just two seasons together in Tampa Bay, but it seems that Gronk made quite an impression, especially when considering how much time Arians spent coaching Antonio Brown.

Those two years together were very successful ones for Gronk and Arians. They included a Super Bowl win in their first year together and the NFC South crown this past year.

During those two seasons, Gronk racked up 1425 yards and 13 touchdowns during the regular season as part of one of the NFL’s best groups of pass catchers.

With Gronk heading into retirement this offseason, it seems that Arians will have a much less interesting year as he heads into his new role as a senior football consultant for the Buccaneers.