A Sunburnt Bruce Arians Shows Up To The White House With The Bucs, Becomes An Instant Meme 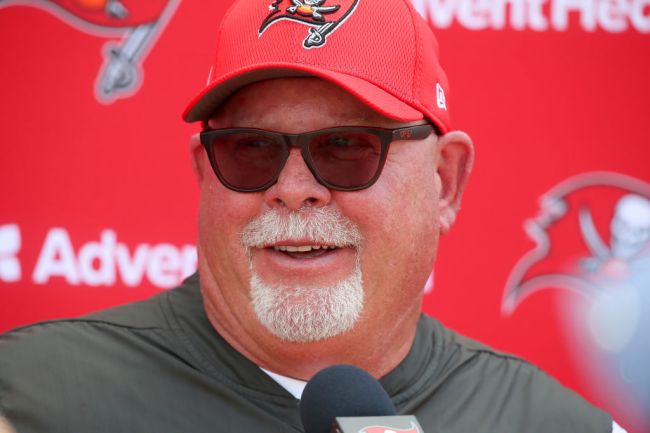 The Tampa Bay Buccaneers made their trip to the White House on Tuesday to celebrate their Super Bowl LV win over the Kansas City Chiefs. This marked the first time Tom Brady had visited the White House after winning a championship since 2005, but Brady’s appearance wasn’t the most striking, it was actually head coach Bruce Arians that caught everyone’s attention.

Arians showed up looking like he had just spent weeks on the beach without even thinking about putting sunscreen on. His sunburn was next level, and whoever suggested that he wear a dark-red button-down under his coat needs to re-evaluate themselves, because his face literally blended into the shirt.

Twitter was quick to make jokes about Arians’ sunburn as he turned into an instant meme.

Wired: Bruce Arians went to the sun this morning pic.twitter.com/WL2N2VWqfN

Bruce Arians looking like a hot dog about to explode in the microwave pic.twitter.com/WUMm8lWcRf

Nah bruh I can’t deal with Bruce Arians being redder than a Power Ranger 😭😭😭😭😭😭😭 pic.twitter.com/sSHaKkJ8e8

Bruce Arians looks like he should be advertising the KFC $5 Fill Up instead https://t.co/CzUAvVnmVw

Can someone please tell Bruce Arians that sunscreen is important, I’m in pain just looking at him https://t.co/e0OBkHUNiN

Arians has clearly been taking advantage of the sunshine down in Florida this offseason, but he may want to invest in a bit of sunscreen.