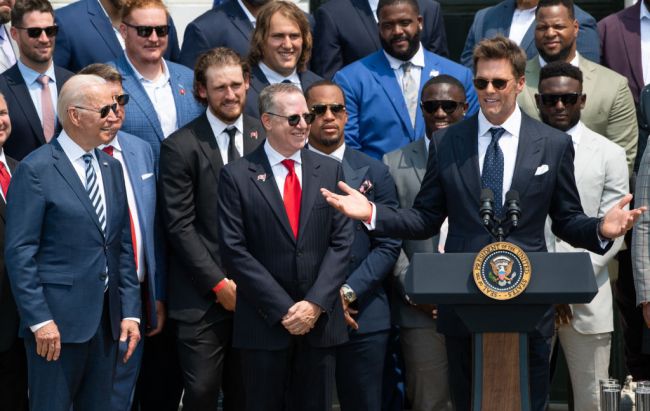 Tom Brady had plenty of jokes while the Bucs visited the White House on Tuesday and no topic was off-limits during his brief speech turned comedy routine in front of President Joe Biden.

While speaking at the White House, Brady stunned the Internet when he busted out a joke referencing the election conspiracy in which many believe Biden didn’t actually win the election.

Not a lot of people think we could win, in fact, 40 percent, still don’t think we won. You understand that, Mr. President?”

.@TomBrady with the jokes, showing support towards @JoeBiden

Not a lot of people think we could win, in fact, 40 percent, still don't think we won. You understand that, Mr. President?"

"People started calling me 'Sleepy Tom'" after he forget the down in Chicago. pic.twitter.com/QGe0D07xVP

Brady went on to poke fun of Donald Trump’s “Sleepy Joe” nickname for President Biden during the election.

We had a game in Chicago where I forgot what down I was, I lost track of one down in 21 years of playing and they started calling me Sleepy Tom, why would they do that to me?

Brady definitely has a future as a stand-up comedian once he retires from football.